A recent inquiry about an uncataloged Baseball Magazine poster on the Net54 vintage baseball card forum has called into question the accuracy of the current checklist of those premium as published in the Standard Catalog of Baseball Cards.

The posters, which were listed in the American Card Catalog system as M114, were premiums that were issued by the baseball monthly magazine as a subscription premium, and were also offered for individual sale between 1910-1957.
The sizes and formats of the posters varied over the years between about 9" x 12-1/4" for single-player posters to 9" x 20" for some of the team pictures. They were printed in sepia tones on semi-gloss paper stock.
The Baseball Magazine posters are one of a handful of issues that are checklisted in the Standard Catalog not on the basis of known surviving examples, but rather on what was advertised by issuer as being available. Other examples include the 1902-1911 Sporting Life cabinets (W600), the 1888-1889 Old Judge cabinets (N173) and the 1911 Obak cabinets (T4).
In the cases of the Baseball Magazine posters and Sporting Life cabinets, the checklists were generated from advertising within the pages of those periodicals. In the cases of the Old Judge and Obak cabinets, the checklist was derived from lists printed as cigarette package inserts or coupons. In all cases, these contemporary offers indicate only what was available, or even intended to be available, to persons redeeming coupons or subscribing.
Espe 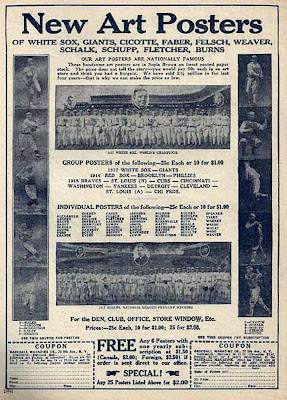 cially in the cases of the cabinet cards, it is possible that certain advertised cards were never ordered by customers and thus were never produced or perhaps were scrapped after the promotions had run their course. This explains why in the cases of some of these issues, the biggest names among the stars of the day are more common in collections today than the more obscure players. It makes sense that when offered a list of players from which to chose, more fans elected to receive a King Kelly, Ty Cobb, or Christy Mathewson cabinet than one of a small-market team's utility infielder or a minor league player.
The Baseball Magazine posters list in the Standard Catalog has been published unchanged for most, if not all, 20 editions of the book. Now, it appears, changes are in order.
The team poster that was posted on Net54 was of the Chicago White Sox "World's Champions" of 1917. It is 7-1/2" x 14-1/2" and features the usual indicia found on most M114s concerning the publisher, etc. Such a poster is not listed in the catalog, which has only two team posters listed for 1917, the Red Sox and the Giants. None are listed for 1918. The Giants and White Sox were the World Series participants in 1917, and it seems likely that it would have been 1918 before posters with the World's Champions notice could have been available as a magazine premium.
That poster appears in an advertisement from Baseball Magazine that offers many team and player posters dating from 1914-1917. The ad is undated, though a small "10 - 19" in the lower-left corner may indicate an October, 1919, issue date.
The upshot is, based on the content of the ad, it looks like the checklist should be revised to include a 1917 White Sox poster and a 1914 St. Louis Cardinals poster. The listing of a Red Sox poster for 1917 may have been in error. If, after suitable inquiry, it cannot be proven to exist, either in a surviving example or included in an ad, the Rex Sox poster will likely be dropped from the checklist.