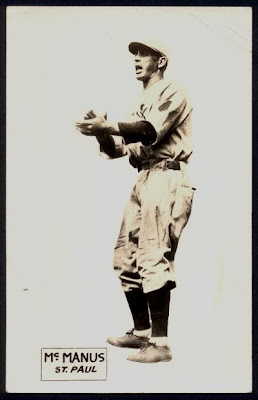 As a result of a string of eBay auctions in late July and early August, we were able to add three players to the 1933-1935 Worch Cigar American Association premiums checklist.
The Worch premiums are often confusing to inexperienced collectors because the name of the sponsor appears nowhere on the 3-7/16" x 5-7/16" blank-backed black-and-white premiums. The postcard-sized player cards were evidently available by sending cigar bands to the company's address in Minneapolis. Many of the surviving cards have the original envelope in which they were mailed, thus establishing the issuer's identity.
Worch Cigar cards are divided into two types: major leaguers and minor leaguers. To date, 146 different players are known (many with two or more poses) among the major leaguers, which appear to have been issued in 1933. Typical prices on common major league players are $100 in Near Mint. Most Hall of Famers bring $300-400 in that condition, with the big guns like Gehrig and Ruth up to $2,000.
The minor league players, until recently, numbered 57, all from teams in the American Association circa 1933-1934. While the minor league checklist is heavy on Twin Cities' players from the Minneapolis Millers 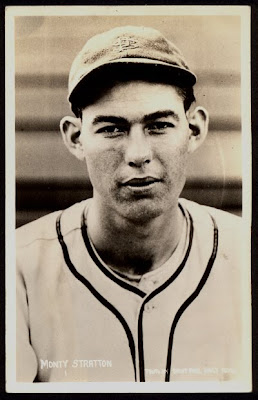 and St. Paul Saints, there are a smattering of players from the Columbus Redbirds, the Kansas City Blues and one or two other teams.
Recent book value on the minor leaguers has been about 50% of the major leaguers, with only one Hall of Famer, Dave Bancroft, manager of the 1933 Millers, known. Catalog values may have to be adjusted upwards, however, based on the recent sale of 10 cards in the eBay sales. All sold at prices at least 3X the book value.
The best sellers among the minor leaguers were three heretofore uncataloged players: Johnny Gill, Minneapolis (1934-1935), Marty McManus, St. Paul manager in 1935, and Monty Stratton, St. Paul (1935). Stratton, of course, was the subject of The Stratton Story, in which Jimmy Stewart portrayed the pitcher trying to return to professional baseball with a wooden leg after a hunting accident. In about NM condition, those cards brought $287, $227, and $320, respectively.
And so it goes in the endeavor of checklisting vintage minor league baseball cards.