George Brett gets a 1974 Rookie Card 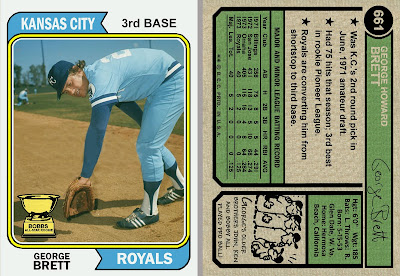 One of the advantages I have as a custom card maker in the 21st Century is the ability to "scoop" the old-time card companies with the advantage of 20-20 hindsight.
You certainly can't blame Topps for not including George Brett in its 1974 card set. In 13 games during his August-September call-up the previous season he had hit only .125 with no power.
But 35 years later, when an early image of Brett turned up on the internet (notice the uniform #25), I thought it would be fun to see how a '74 Brett would have looked.
Topps didn't use the All-Rookie Team trophy on any of its 1974 cards, but I thought it would make a nice additition to my custom and it nicely filled the space at the lower-left of the photo.
It had originally been my intention to do a 1973-style Brett card on the premise that he was going to make the majors with the Royals that season. But given his minor league stats, that would have seemed like quite a stretch.
In truth, I've never liked the 1974 Topps format and didn't like the 1973s much better, but as I worked on the '74, it kind of grew on me. Anyway, I've got a nearly complete 1973-style front and back template made, so if I ever want to make a card in that style, I'm halfway home.