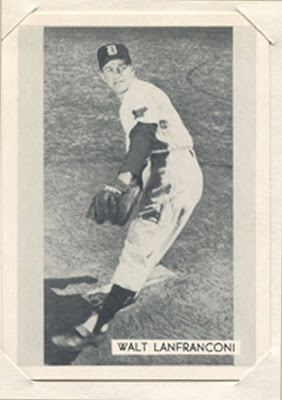 Cataloging the early 1950s minor league baseball card issues by the Globe Printing Co. is a painstaking endeavor.
While we probably (I wouldn't bet the ranch ot it, though) have a record of every team that actually issued the cards, we don't have complete checklists for many of those teams.
In our Nov. 22, 2009 presentation, we ran a lengthy list of players' cards from the 1952 Dallas Eagles issue. The Eagles were a Class AA Texas League farm club of the Cleveland Indians in 1952. That checklist contained 21 cards, and we speculated that since it appears that Globe printed on six-card sheets, there were probably a few players missing from our list.
We've now got confirmation of one of those "missing" cards; it's pitcher Walt Lanfranconi.
That information comes courtesy of Greg Varhely, whose father, Edward, was also a pitcher on the '52 Dallas team. Greg had found our column while surfing the 'net for information about his dad's career. Among his fa 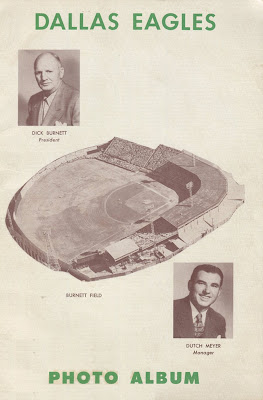 ther's effects were a pair of the Eagles' photo albums and a stack of the Globe player cards.
Lanfranconi was the only card that wasn't in that legacy. Lanfranconi was a Vermont native who, except for World War II service in 1943-45, played pro ball from 1937 through 1953, usually at the Class AA or AAA minor league level. He also pitched in the majors, going 0-1 with the Chicago Cubs in 1941 and 4-4 with the 1947 Boston Braves.
Greg had sent scans of all of the '52 Globe Eagles he has. They are a good looking group of cards, generally featuring posed-action photos.
The back cover of the album indicates that the player cards were to be given away at "special photo nights throughout the season." That seems to have been typical of the Globe minor league cards, which explains why complete sets of most teams are virtually unknown.