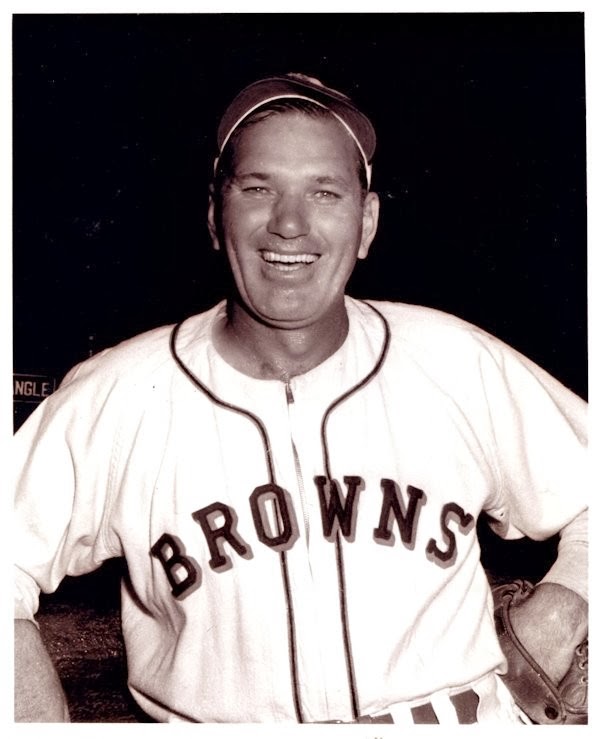 I've known for many years that Dizzy Dean, nearly six years after his Hall of Fame career as a National League pitcher had ended, made a one-game return to the majors.

However, I had never stumbled across the details of that anomaly until I read microfilm of the 1947 issues of The Sporting News.

There I learned of Dean's appearance for the St. Louis Browns in the final game of the 1947 season, Sept. 28 in Sportsman's Park hosting the Chicago White Sox. He was 37 years old.
Dean had often said during his daily play-by-play broadcasts for the Browns that he could do better than the current crop of American League pitchers. “Gosh folks,” he was quoted, “I haven’t pitched baseball since 1941, but I feel sure I could go out there today and do better than a lot of these throwers who are drawing big salaries as major league pitchers.”

He signed a $1 contract to make his “comeback” legal; at the time he was making a reported $25,000 a year broadcasting the Browns’ games. Vern Stephens, one of the Browns players, told his hometown paper in a post-season interview that it was his understanding that Dean had also received a cut of the gate receipts.

When the Browns returned from their final road trip of the season Diz worked out with the club, pitched batting practice and announced he was ready.

Attendance had sunk as low as 315 fans near the end of what would be the Browns’ 95-59 season. The normal turnout for a season-ending home finale might have been 2,500 or so. However with Dean as the draw, the turnstiles clicked and 15,916 fans, many of them no doubt holdovers from Dean’s glory days with Gashouse Gang Cardinals, were on hand. It was the Brownies third-highest paid attendance of the 1947 season.

Dean took the mound wearing number 31, rather than the number 17 jersey he had worn for the Cardinals. Outfielder Paul Lehner wore number 17 for the Browns.

Dean pitched four innings, holding the Chicago White Sox scoreless and allowing only three hits. He had no strikeouts and issued one walk. He faced 14 batters and used only 39 pitches to complete his four-inning stint.

In his only at-bat, he swung at the first pitch and singled. Trying to reach second base on a grounder, he slid into the bag but came up limping, having pulled a muscle. He left the game, tipping his cap to the cheering crowd and thanking his mates for their fine fielding; they had played flawless defense behind him, turning two double plays. In his at-bat he wielded a specially made “barber pole” bat with red striping, made for him by the Southwest Manufacturing Co.

Dean was relieved on the mound by Glen Moulder, who shouldered the 5-2 loss. Ed Lopat pitched the complete-game victory for the White Sox.

Manager Muddy Ruel had not approved of the Browns president Richard Muckerman and general manager William O. Dewitt signing Dean. After watching his performance on the mound that day, however, he graciously applauded Dean.

Dean always swore he would never return to the minors after his major league career was over, but he unwittingly found himself technically in the minors for a few days after his one-day “comeback.”

He could not be given his unconditional release after that game because under major league rules, waivers for that purpose were not permitted after Sept. 25, three days before Dean went to the pitcher’s mound for the final game of the 1947 season. The Browns had to release him outright to their  farm in the American Association. The Mud Hens, in turn, obtained the necessary Association waivers to make him a free agent.

Actually, Dean broke his vow two years later, when he appeared with the Clovis Pioneers in the Class C West Texas-New Mexico League. In 1949 Diz co-owned the team with his brother Paul, who was manager.

On "Dizzy Dean Night," July 8, Diz hit a pinch-hit single in the bottom of the eighth inning to help the Pioneers to a 7-2 victory over Lubbock. Dean also coached on the bases and did some announcing during the game.
Posted by Bob Lemke at 1:48 PM