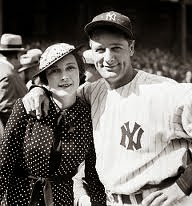 At his death in 1941, Gehrig left only
a modest estate to his wife Eleanor.

While reading the April 12, 1945, issue of The Sporting News, I found a paragraph about the estate of the late Lou Gehrig, who had died June 2, 1941.
I was struck by the relatively modest figure that was given--$159,475.
The article said this was Gehrig’s “net estate” in an estate tax appraisal done a week earlier.
The article didn’t explain what comprised a “net estate,” but I assume that’s what was left after taxes.
It was reported, ‘The estate included mortgages, cash and insurance of $128,085 and stocks and bonds valued at $28,662.”
Certainly $160K was not chump change in 1945; today it would be the equivalent of about $2,450,000. But considering that Gehrig was one of the highest paid players on his time, what he left behind seems—I’ll say it again—modest.
Gehrig’s will provided that a trust fund be set up to provide $205 per month to his parents, Mrs. and Mrs. Lou G. Gehrig; the residue went to his widow Eleanor. Upon Eleanor’s passing, any estate remainder would have gone to her mother, Mrs. Nellie Twitchell. I doubt Mrs. Twitchell ever became a beneficiary, as Eleanor Gehrig lived to the age of 80, dying on her birthday, March 6, 1984.
I find it interesting that today, many of the geegaws that decorated the mantel or hung in the closet of Gehrig’s apartment have collectible value that exceeds that of his entire estate in 1941.