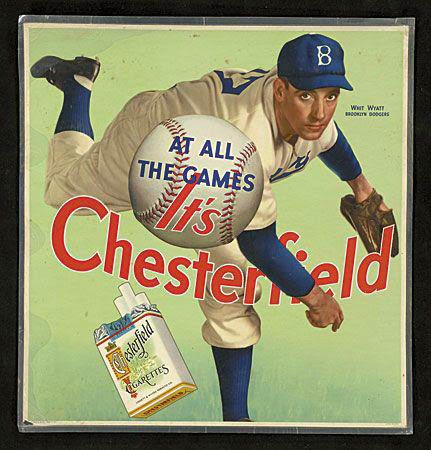 It's not often that the hobby gets a glimpse into production numbers of memorabilia produced 40, 50 or more years ago.

While reading microfilm of 1941 Sporting News issues just prior to the World Series, I found one such reference that gives at least a general idea in one area of baseball collectibles.

In his column, TSN publisher J.G. Taylor Spink revealed that Dodgers pitcher Whit Wyatt was being featured on 555,000 advertising pieces for Chesterfield cigarettes. Wyatt was an appropriate subject for the Chesterfield ads; he owned a 727-acre tobacco farm at Buchanan, Ga.

Chesterfield was a major user of baseball players and other sports figures in its advertising of the 1940s-60s. Bigger-name players seen on their collectibles included Ted Williams, Stan Musial and Gil Hodges. They were also a weekly advertiser in The Sporting News, which probably accounts for Spinks' mention of their Wyatt promotions. Wyatt appeared in a nearly half-page ad for Chesterfield in the Oct. 2 issue. During the war Chesterfield and TSN were tied up in some sort of program providing free cigarettes and copies of the paper to hospitalized war veterans.

While Whit Wyatt is not widely remembered by most of today's fans and collectors he was big news in 1941; one of the principal reasons that Brooklyn made it to the World Series.

After an 8-3 season in 1939, he won 15 (lost 14) for Brooklyn in 1940 and tied for the league lead with five shutouts. In 1941, Wyatt tied with teammate Kirby Higbe to lead the National League with 22 wins; his seven shutouts were tops. He had the Dodgers' only win against the Yankees in the World Series. He was third in the MVP balloting.

Despite appearing on more than a half-million colorful ad pieces for Chesterfield in 1941, surviving examples of those items are seldom seen today. That is, genuine examples are scarce (worth several hundred dollars in decent condition); one of his ad posters has been reproduced in several sizes and materials and can be found on eBay for $10 or so.
Posted by Bob Lemke at 8:53 AM