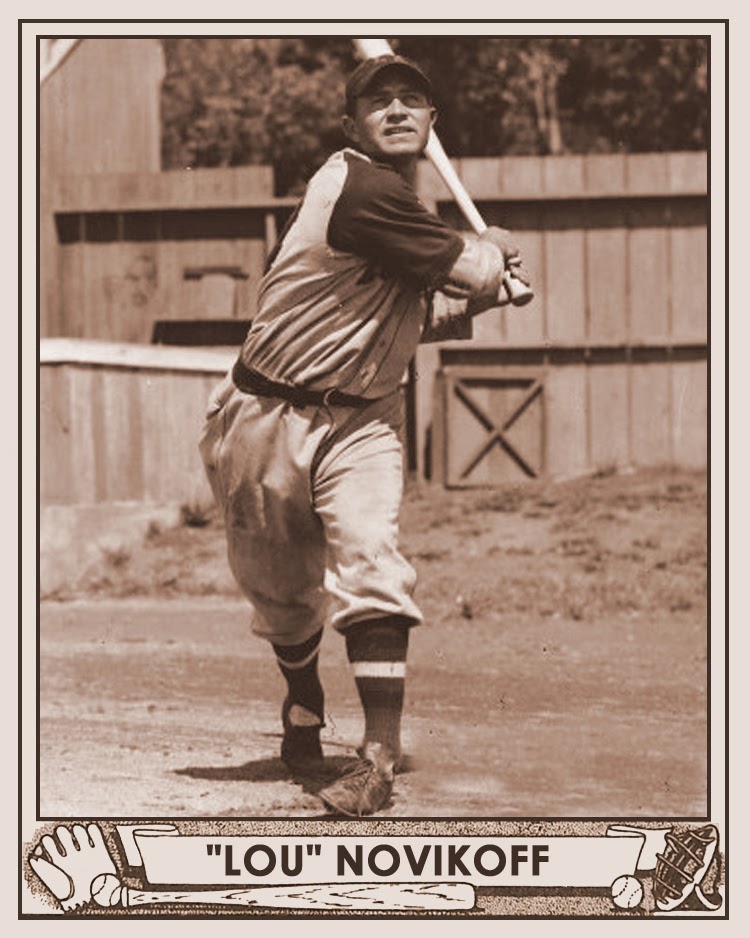 For as highly publicized as he was during his entire professional baseball career (1937-50), Lou Novikoff left a meager baseball card legacy.

I recently added to his non-contemporary baseball card heritage with a pair of custom cards in the formats of 1940 and 1941 Play Ball.

Even if he had been in the major leagues in the Play Ball years, Novikoff would not have appeared on the Gum, Inc. cards. With the exception of Charlie Grimm, Frank Chance, Johnny Evers and Tony Lazzeri, who were included among the "old-timers" in the 1940 set, there were no Chicago Cubs in the 1939-41 Play Ball issues.

I don't know whether Gum, Inc., chose not to publicize the players owned by his rival gum maker, P.K. Wrigley, or whether Wrigley refused to allow his players to promote sales of his adversary.

I was originally inspired to create my Novikoff custom cards on the basis of stories my father told me 50+ years ago about "The Mad Russian." I found his name and his exploits in page after page as I read back issues of The Sporting News.

Usually when I present my custom cards I refer readers to other sites for biographical details. Surprisingly, Novikoff is not (yet) represented in the SABR Baseball Biography Project. So I'll try to digest the voluminous notes I've taken over the years to give you a feel for one of the most highly-touted phenoms and biggest major league flops of his era.

I'm going to present my baseball biography of Lou Novikoff in two parts today and tomorrow.

Because of his, shall we say, colorful personality on and off the field, Novikoff acquired the nickname of "The Mad Russian". Through the years sports writers riffed on that nickname. Los Angeles baseball beat writer Bob Ray particularly delighted in coming up with new variations. Among those seen were: Slammin’ Slav, Irate Muscovite, Socking Soviet, Moscow Mauler and Russian Riot. Early in 1940, as the Winter War between Finland and aggressor Russia was drawing to a close, Novikoff tried – unsuccessfully – to get the writers to change his nickname to the “Clouting Scandinavian.”

Novikoff’s parents were Russian-born; he was born in Glendale, Ariz., in 1915. Until he was 10 years old, it is said he only spoke Russian. He was one of 12 children in a chronically impoverished household that settled in Southern California when Louie was a toddler.

In his late teens and 20s, Novikoff was a slugging pitcher on several semi-pro softball teams in Southern California. He began with the Torrance team in the National Niteball League in 1933, then moved on to the Huntington Beach Oilers, which won national championships in 1935 and 1936. Usually playing under the name of Lou Nova or Neva to preserve his amateur status, he was said to have made as much as $70 per game. In one playoff game he struck out 22 in eight innings. He once slugged a softball 325 feet, which some said was equivalent to hitting a baseball 500 feet. In 1965 he became the first player named to the International Softball Congress Hall of Fame.

Noting that he was as proficient at batting as he was at pitching, the owner-manager of his team, oil man Joe Rodgers, convinced Novikoff to go to a tryout camp for the Hollywood Stars of the Pacific Coast League prior to the 1936 season. While he hit everything that was thrown at him, his failure to catch or stop anything that came his way in right field caused the Stars to pass on him.

The next spring he went to a Los Angeles Angels tryout camp. The Angels liked his raw potential and signed him for 1937. They farmed him out to their affiliate club at Ponca City, Okla., in the Class C Western Association. In his first season of pro ball he hit .351, just three points behind the league leader, clouting 16 home runs and driving in 112 in 124 games.

Novikoff wore out the rails in 1939 (he said in 1949 that he had never been on an airplane). He started the season with a handful of games for Los Angeles. In the midst of the Angels’ 19-game win streak he was batting .363 but was shipped out to Milwaukee when the American Association season opened. He didn’t do well at Milwaukee, batting only .214 while playing part-time. After 11 games he was returned to L.A., then optioned immediately to Tulsa on May 15.

He regained his batting eye at Tulsa and led the Texas League with a .368 average – 50 points better than the runner-up. A month before the close of the Texas loop season, Los Angeles recalled Novikoff on Aug. 20 as they put on an unsuccessful drive to catch league-leading Seattle.

In 1939, The Sporting News named Novikoff  the No. 1 Minor League Player of 1939. In recognition an engraved scroll was presented to him on Louie Novikoff Day at Wrigley Field, June 2, 1940.

There is a picture of the presentation in a contemporary issue of TSN, showing Novikoff with an armload of gifts along with the scroll, which was presented on behalf of the sporting paper by comedian and baseball fan extraordinaire Joe E. Brown.

In celebration of the award, Novikoff hit his 18th and 19th home runs of the season (along with a pair of singles) during the doubleheader. The Angels lost the opener 14-13 to San Diego, but Kovikoff had a three-run walk-off homer to break a 0-0 tie in the second game.

Part of the entertainment on Novikoff’s “day” was the appearance of a Russian orchestra and the 125-voice Los Angeles Civic Chorus. Novikoff, himself, stole the musical portion of the show by singing “My Wild Irish Rose” in what was described as a “fine baritone.” When the crowd demanded an encore, he sang “Down By the Old Mill Stream.”

While it was widely assumed Novikoff would go to the Cubs after the 1940 season, due to the teams’ working relationship, Angels president Dave Fleming declared any major league club could purchase Novikoff for $100,000.

Novikoff’s biggest fan in Los Angeles was his wife Esther. Each time he came to bat she would shout mock abuse from the grandstand. One of her favorite jibes was to yell, “Strike out that big bum!” Novikoff said he always heard her taunts and that “it seems to make me bear down all the harder.” When he asked his spouse why she did it, she responded, “I have fun doing it. And what do you care anyhow? I know none of those pitchers can strike you out.”

Part of the reason Novikoff was hard to strike out was that he was an exceptionally effective bad-ball hitter. In 1940, in answer to a Hollywood club official’s inquiry about Novikoff’s batting weakness, his manager Jigger Statz replied, “All I can say is that if your pitchers will pitch the ball somewhere in the ball park – in the general direction of the plate, anyway – Novikoff will probably hit it.”

Novikoff had a great year in 1940. For the third straight season he led his league in hitting with a .363 mark. He was also tops with 41 home runs and 259 hits. His 438 total bases led the PCL and were 109 better than the No. 2 man, San Francisco third baseman Ted Jennings.

Contrary to reports of fielding deficiencies, Novikoff made only seven errors in the outfield in 1940, a .981 average that was sixth-best among outfielders in 50 games or more.

The Angels were second in the Pacific Coast League pennant race, losing to Seattle. In the Shaughnessy-style four-team post-season playoff, Los Angeles again finished second to the Rainiers. Novikoff batted .380 in the playoffs, with a pair of home runs.

Long before the season was over, the Cubs exercised their option on Novikoff and reportedly paid the $100,000 asking price, purchasing him in a package deal with infielder Lou Stringer, who went for $50,000. In actuality, the money from the purchase ultimately went from one of Philip K. Wrigley’s pockets to another – he owned both the Chicago Cubs and Los Angeles Angels (technically, the Angels were owned by the Santa Catalina Island Co., a Wrigley-affiliated entity).

The Associated Press named Novikoff to the PCL All-Star team. The Los Angeles sportswriters named him the Angels’ Most Valuable Player but he came in second in PCL MVP honors to George Archie, Seattle first baseman. Novikoff’s fans thought he had been robbed, of course. And they have had a point. Novikoff outhit Archie by 39 points (.363 to .324). He had 259 hits to Archie’s 217. Novikoff’s 41 home runs far outpaced Archie’s eight. Archie did lead Novikoff slightly in doubles (46 to 44) and triples (nine to six).

You may have already picked up on the fact that my 1940-style Novikoff custom card pictures him as an L.A. Angel, and that designation is used on the back. Veteran collectors know Play Ball didn't issue minor league cards, but in the tradition of 1949 Bowman, it wouldn't be too much of a stretch to think they might have produced a special issue for the West Coast.

(To be continued tomorrow) 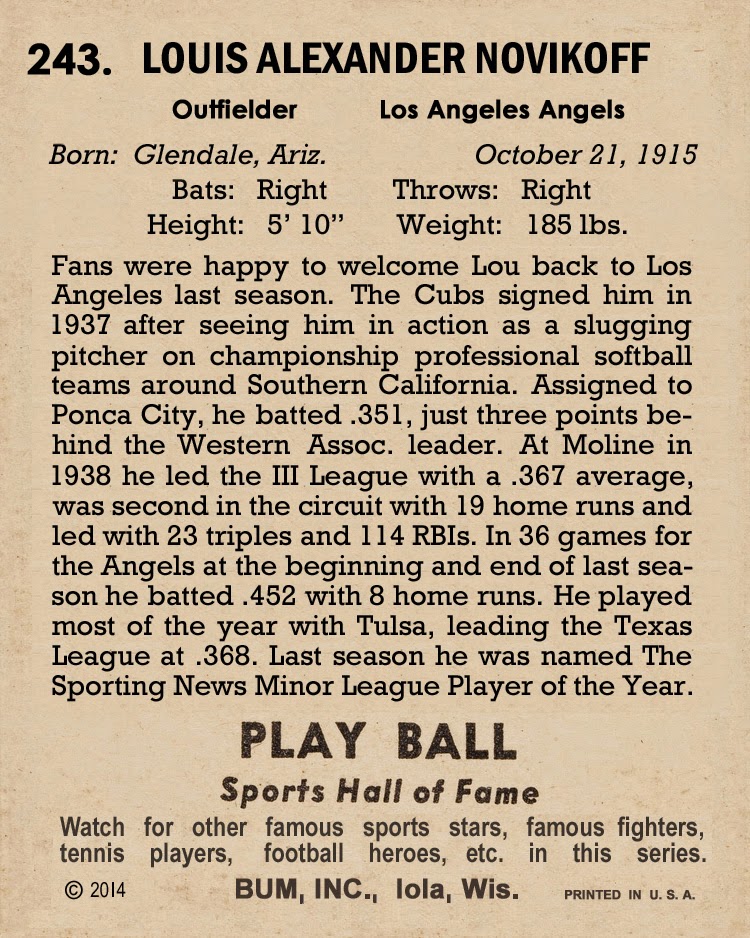