Using Vernon first baseman Babe Borton to get to players on other teams, Raymond followed the Tigers up and down the Left Coast fixing ballgames. He later bragged that he had made $50,000 on crooked games. 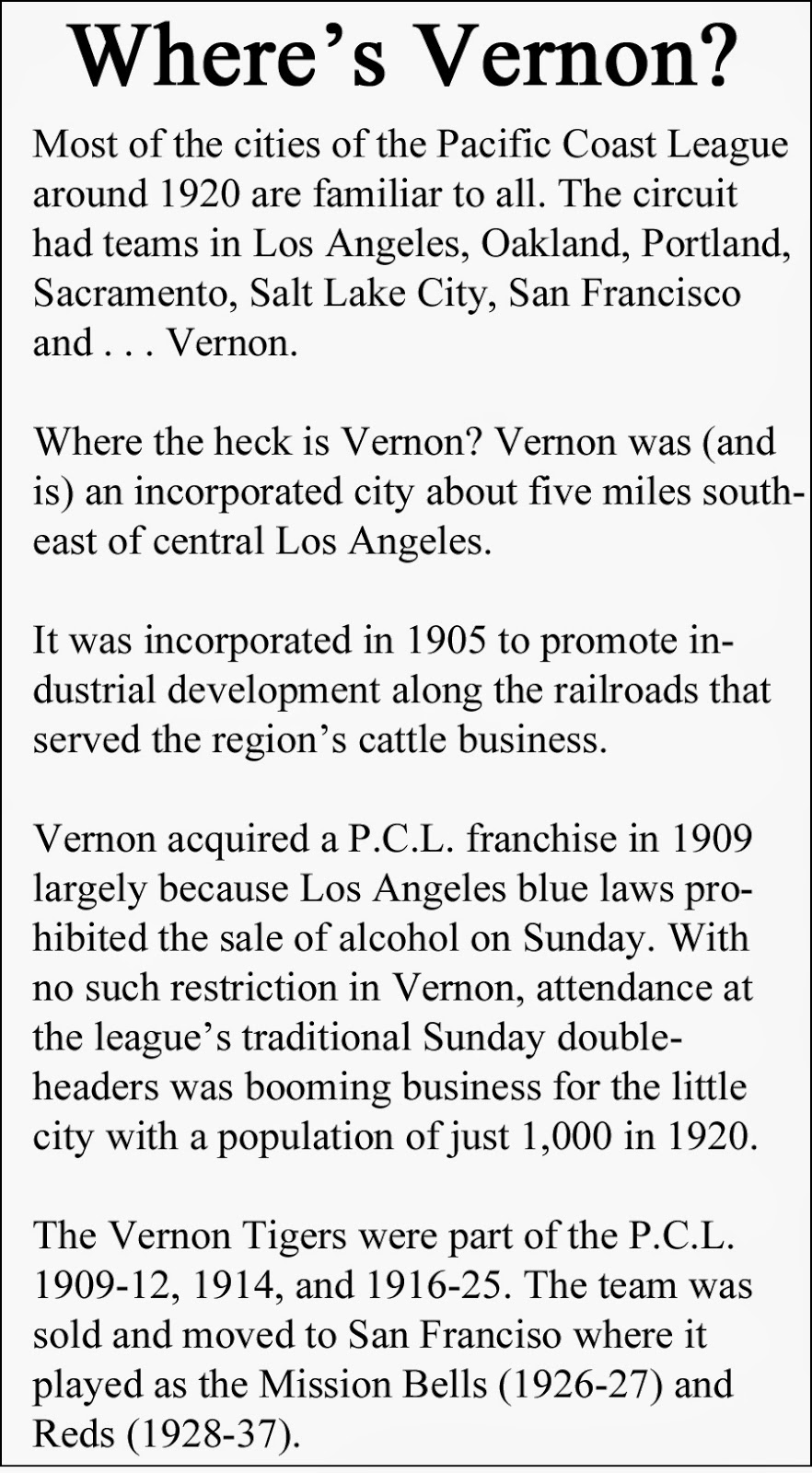 Vernon won the 1919 PCL pennant, finishing 2-1/2 games ahead of Los Angeles and 18 games in front of third-place Salt Lake City. In winning the championship, the Tigers split a $10,000 bonus pool put up by fans, plus the $8,000 winners’ share of the “Little World Series.”
While the Bees as a team missed out on a similar windfall promised for a pennant win, at least three of the team’s key players had collected personal bonus money amounting to something like two weeks’ salary for the average Coast Leaguer. A year later those private pension programs put the players beyond the pale of Organized Baseball; run out of the game by team and league officials with the wisdom and courage to protect the integrity of the Pacific Coast League.

When the fun hit the fan in the Pacific Coast League, Gene (or Jean, as he sometimes identified himself) Dale may have thought he was out of harm's way. For the 1920 season, Dale had been dealt to Dallas, where he had begun his professional career a decade earlier.

Emmett Eugene Dale was born June 16, 1889 in St. Louis. While his obituary mentions that he had a trial with Sacramento in the P.C.L., available records don’t show the results. His first real experience came with Dallas in the Texas League in 1910.

The Cleveland Indians drafted Dale from Dallas after the 1910 season, but turned him over to Providence in the Eastern League prior to the start of the 1911 campaign. Dale appeared in fewer than 10 games with the Grays before he was returned to Dallas.

In 103 innings with Dallas in 1911, Dale compiled an impressive 179 strikeouts on his way to a 12-8 season; the team finished in fourth place. Dale, however, finished in the National League, getting a five-game trial with his home-team Cardinals. In his 15 innings with St. Louis, Dale gave up a bit less than a hit per frame on average, while walking 16 and fanning 13. He ended his first major-league season with an 0-2 record on an ERA of 6.75. On the bright side, he did hit an even .400 – two singles in five at-bats.

Dale never did win a game for the Cardinals. With the team through July of the 1912 season, he appeared in 19 games, all but three in relief. He was 0-5 with a 6.57 ERA when he was sent out to Montreal of the International League in early August.

Dale pitched for the Royals the remainder of 1912 and throughout the following two seasons. Undoubtedly he adopted the Gallic spelling of his first name while among the Quebecois. He may also have acquired a propensity for perfidy there – one of his teammates was Chick Gandil, future ring-leader of the Black Sox.

It’s hard to imagine what, with a record like that, the Cincinnati Reds saw to indicate Dale could help their staff. Perhaps it was his hitting. According to available records, Dale had a professional career batting average of something on the order of .251, but he did have occasional flashes of batting brilliance. Three of his four hits for Montreal in 1912, for instance, were doubles. And in 1914 he out-hit and out-slugged another International League pitcher named Babe Ruth. That season, in 99 at-bats, Dale hit .263 with a pair of home runs. Ruth had 121 at-bats in 1914, hitting .231 with a single round-tripper.

Dale’s first season with Cincinnati in 1915 was the best of his pro career. For a seventh-place team he managed an 18-17 record on an ERA of only 2.46. He was also credited (by today’s standards) with three saves in relief. Dale led the Reds’ staff (and was tied for second in the league) with 49 pitching appearances. His 18 wins and 297 innings were also team-bests and his innings worked were fourth-highest in the league. Unfortunately, Dale’s 104 walks were also tops in the Senior Circuit.

Things didn’t work out so well between Dale and manager Buck Herzog in 1916. In early July Dale had a 3-4 record going with a 5.17 ERA The pitcher complained in the press that his teammates were giving him no “encouragement.”

When the team was preparing to leave for St. Louis for a series over the Fourth of July, Dale was ordered to remain in Cincinnati. Aggrieved at missing the road trip to his home town, Dale disobeyed orders and went home to celebrate the Fourth, causing him to be suspended from the team. “Indifferent work” was the reason cited. That same phrase would crop up several times in the coming years when major league teams got rid of players whom they suspected of being on the take. While it obviously cannot be proven at this juncture, Dale’s later record may indicate there was more to his suspension than just poor performance. Either way, Dale never got another chance in the major leagues.

With the Reds Dale also expanded the circle of his teammates who would eventually run afoul of gambling allegations. Teammates Hal Chase and Phil Douglas were run out of baseball altogether in later years, while manager Buck Herzog and mound-mate Rube Benton were unofficially black-balled from the major leagues a few years later. Sent to Indianapolis for the remainder of the season, Dale was 2-2 in six games.

The 1917 season saw Dale dropped back a class in baseball’s hierarchy, to the Western League. With sixth-place Denver, Dale had a sparkling 14-5 season going when he was called back to Indianapolis. In 11 games for the Indians, Dale had a 4-3 winning record and a 3.05 to help the team to the American Association pennant.

That year the winners of the A.A. and International League met in a best-of-seven “Junior World Series,” with Toronto representing the I.L. Surprisingly, Dale started the first game in right field. He was 2-for-5 at the plate to help the team to an 8-2 win. He appeared in the second game as a pinch-hitter, but failed to come through in a 4-0 loss. Indianapolis won the next two games to take a 3-1 lead.

A double-header was set for Sunday, Sept. 30. Indianapolis won the first game and the series. The teams played the second game of the twin-bill as an exhibition, with Dale on the mound for Indy. That game was called in a 4-4 tie after six innings.

An interesting side note to Gene Dale’s 1917 season is that he nominally led two minor leagues in hitting that year. Though he didn’t have enough at-bats to qualify for the batting crown, his .367 mark with Denver was tops in the Western League, while his .370 with Indianapolis was the best in the American Association.

Dale set another record with Indianapolis in 1918, though because of the war-shortened nature of the season, which closed on July 21, perhaps it should appear with an asterisk. Over nine games and despite the fact he had a 2.-3 losing record, Dale compi
led a 1.50 ERA, a mark that still stands as a season best in the American Association.

His last pitching assignment at Indy in 1918 was a pair of relief appearances in both ends of a Memorial Day double-header versus Louisville. He threw an inning in each game, but was not part of the decision in either Indianapolis loss. On June 5 , Dale made his final appearance of the season, playing right field and going 2-4 at the plate in a win over Minneapolis.

In mid-June, along with hundreds of other ballplayers, Dale felt the draft. He was assigned to military duty at Jefferson Barracks, near his home town of St. Louis, for the duration.