Using Vernon first baseman Babe Borton to get to players on other teams, Raymond followed the Tigers up and down the Left Coast fixing ballgames. He later bragged that he had made $50,000 on crooked games.
Vernon won the 1919 PCL pennant, finishing 2-1/2 games ahead of Los Angeles and 18 games in front of third-place Salt Lake City. In winning the championship, the Tigers split a $10,000 bonus pool put up by fans, plus the $8,000 winners’ share of the “Little World Series.”
While the Bees as a team missed out on a similar windfall promised for a pennant win, at least three of the team’s key players had collected personal bonus money amounting to something like two weeks’ salary for the average Coast Leaguer. A year later those private pension programs put the players beyond the pale of Organized Baseball; run out of the game by team and league officials with the wisdom and courage to protect the integrity of the Pacific Coast League.

Back with Indianapolis in 1919, Dale was tagged with two losses in the two games he pitched before being sent to Salt Lake City.
Dale saw his first action for the Bees when he started on May 15. He threw 2.1 innings before the home crowd in an 8-7 loss to Seattle, giving up six hits, five runs and striking out one. He played his next three games for Salt Lake City in the outfield, subbing for injured right fielder (and fellow conspirator) Bill Rumler. In the three games in the garden, Dale hit at a 4-for-14 pace (.286) with a double and a home run.  The Sporting News commented, “Jean Dale hasn’t been a shining light as a pitcher with Salt Lake, but he looked pretty good in the outfield.” Rumler returned to the lineup on May 23, and Dale returned to the mound.
Over 30 games for the Bees, Dale earned a break-even record of 13-13 though he had an unenviable 4.48 ERA. In 217 innings he gave up 243 hits and struck out and walked 85 each.
Naturally, it’s hard to say what Dale’s record might have been if he hadn’t had a side job of helping the Vernon team win. (In games against the Tigers in which he appeared, Dale’s team was 1-4 in 1919.) Interestingly, Dale had one of his better-batting seasons with S.L.C. in 1919, hitting .325 with two home runs; when he played Vernon, he hit .308. Of the six errors charged to Dale in 1919, one-third were in games against Vernon.
It was on the mound, however, that Dale seemingly did his part to throw the pennant Vernon’s way. The two teams met in 13 straight games between Sept. 16-28. When that important series opened, Vernon was in a tie with Los Angeles for first place in the P.C.L.; Salt Lake City was third, 10 games back.
The Bees stung the Tigers in the first two games of the series, then Dale did his dirty work. He started three of the next seven games and lost all of them.
On Sept. 18 he gave up 10 hits and a pair of passes in a 7-4 loss. It cannot be determined from the box score how many of the four hits in the fifth inning were charged to Dale, who was yanked after 4-1/3 frames, but he was responsible for the three runs scattered across the first three innings by Vernon.
Dale came back for the second game of a double-header on the 20th. He took a complete game loss that afternoon 6-3 walking only one Tiger, but allowing 13 hits and making an error.
In Vernon on Sept. 24, he again pitched – and lost – a complete game by a 6-2 score. He gave up nine hits and eight walks in that effort.
Through the efforts of Dale and his accomplices, Salt Lake City lost nine of the 13 games with Vernon. While Vernon was winning fixed games, Los Angeles was winning (presumably) honestly. When the Sunday double-headers were over on Sept. 28, the Angels had a 2-1/2-game lead over Vernon.
The 1919 Coast League pennant race came down to what should have been an incredibly dramatic finish, Vernon and L.A. playing a seven-game series at Vernon for all the marbles. The teams split a double-header on Oct. 1, then Vernon ran away with the pennant, sweeping the final five contests.
The Vernon team collected its promised $10,000 championship bonus, then split another $8,000 as its share of the gate from the “Junior World Series,” besting St. Paul, champions of the American Association in a best-of-nine series.
On Oct. 18, Dale unwisely accepted a $500 check from Babe Borton, allegedly for services rendered during the season.
The 1920 season, as mentioned, found Gene Dale back in Dallas. Though he had an excellent 2.61 ERA over 39 games, his record was a disappointing 15-18 for the sixth-place Marines.
At least two of Dale’s performances that year were stellar to a degree that earned special mention in The Sporting News. On June 17, Dallas was in the bottom of the 11th inning at San Antonio when Dale hit his sole season triple to win it for himself. He had allowed only one hit in the game through the first six innings.
Against Wichita Falls on Sept. 5, Dale pitched no-hit ball through nine innings but lost 1-0 when a teammate made two errors behind him in the 12th.
By the time Dale’s 1920 season was over, the scandal had surfaced on the Coast and a grand jury was soon convened.

Borton was amazingly forthcoming before the panel and consequently Dale’s name came up. The grand jury naturally wished to interrogate the pitcher. P.C.L. president William McCarthy wired Dale at his home in St. Louis to speed to Los Angeles to appear. McCarthy promised Dale his round-trip travel expenses and hotel fare for his time in L.A.
Dale responded that he would need an additional $300 cash payment over and above expenses. McCarthy balked at this, saying that he didn’t consider it proper procedure. At that, Dale declined to make the trip. He excused himself by saying the proximity of the presidential election, “which will demand by presence in St. Louis.” Dale did provide the grand jury with an affidavit in which he averred that the $500 he received from Borton was repayment of a loan made the previous year.
In its efforts to get Dale on the witness stand, the grand jury sought the assistance of President J. Walter Morris of the Texas League. Morris told Coast authorities that he would do his best to get Dale before the panel, and if he did not get a clean bill of health “he need never show his face in Texas again.”
In mid-November, Dale did travel to Kansas City to meet with McCarthy, who then returned with Dale to St. Louis for further investigation.
On Dec. 10, the Los Angeles County grand jury returned indictments against Borton and Raymond, and against Dale’s 1919 Salt Lake City teammates Bill Rumler and Harl Maggert. Dale emerged unscathed. On Dec. 24 a California judge dismissed the indictments. As it turned out, conspiring to throw ballgames was not a criminal offense in the Golden State. Merry Christmas!
While most of ballplayers involved in the 1919 P.C.L. scandal never played another game in Organized Baseball, Gene Dale may have – literally.
On Aug. 13, 1921, a pitcher named Dale appeared in the box score as having pitched four innings of relief for the Newark Bears of the International League against Buffalo. He gave up three hits and a walk and struck out three, but did not participate in the decision. He was 0-for-2 at the plate. There was no fanfare in the sporting press about this Dale’s appearance in the game, or his disappearance thereafter.
It has been written elsewhere that the Dale who pitched for Newark on Aug. 13, 1921, was a collegian, not the then-32-year-old Gene Dale. It was not unusual for minor league teams to give trials to amateur players in that era, especially second-division teams such as Newark in 1921, so the pitcher could have been a college player who never again appeared in an O.B. game.
But it’s not impossible that Gene Dale had taken the mound for Newark that day. He was pitching Sunday ball in a fast semi-pro league in Missouri in 1921. He had not officially banned from Organized Baseball, so Newark may have decided to take a chance on him. It must be assumed that if it was Gene Dale, pressure was brought on the Newark team to return him to the blacklist. Perhaps a study of local newspapers box scores for the Cape Giradeau Capahas around that date would be informative as to Gene Dale’s whereabouts on Aug. 13, 1921. In 1921, August 13 was a Saturday, so if Gene Dale had pitched in Newark that day, he would not have been in southeastern Missouri the next day.
Dale died in 1958 at the age of 68 in St. Louis. 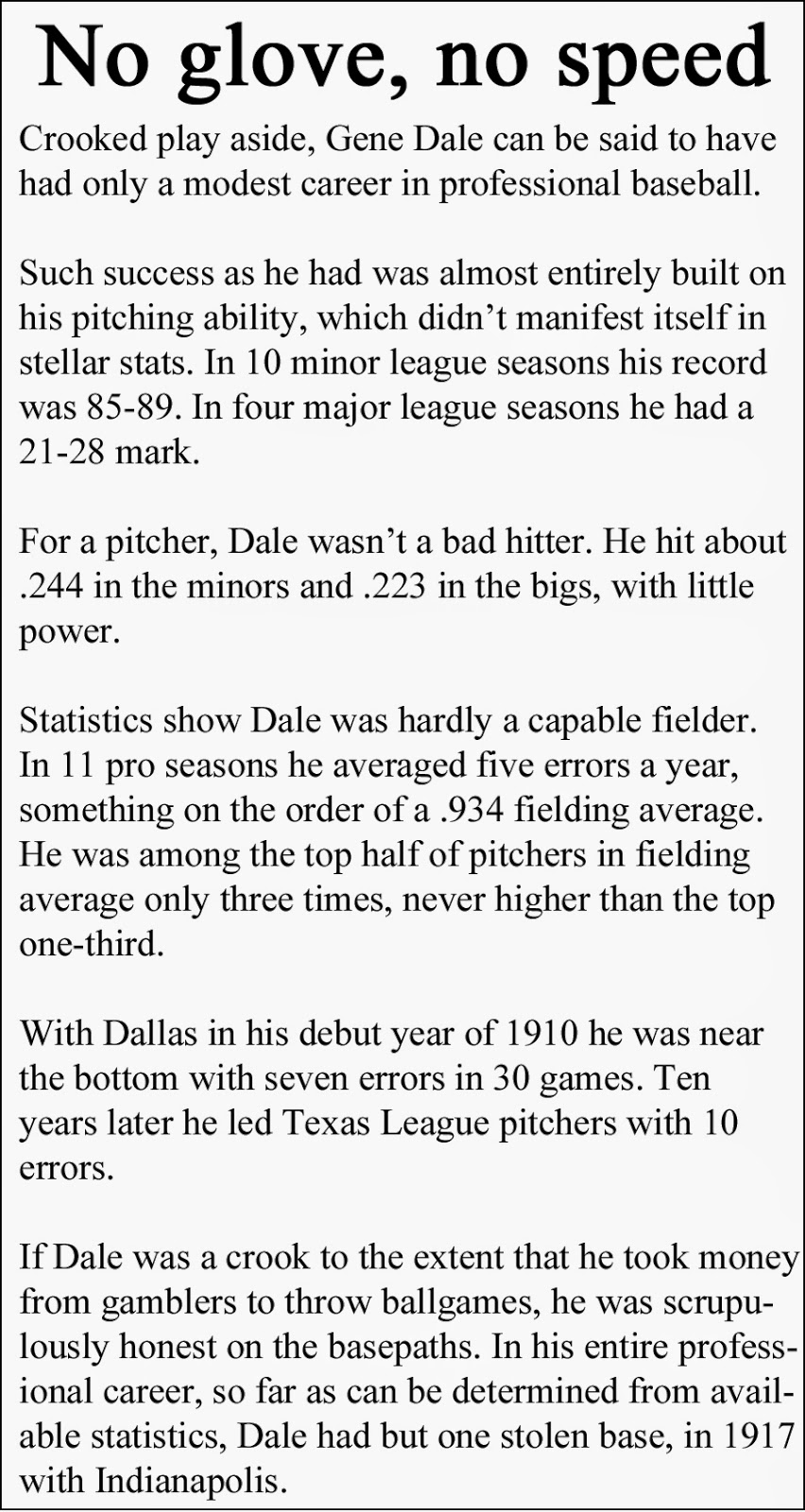 Further reading
There is an excellent biography of Gene Dale in the Society for American Baseball Research biography file. It’s written by Bill Lamb.
http://sabr.org/bioproj/person/69ceccb1 .


Continued next month
Check back here in mid-July for the second installment of The Bad News Bees, detailing the involvement of Har Maggert in the 1919 scandal.