I’m going to use the excuse of having a nice image of a recent addition to the 1951 Hage’s Diary minor league set to try to sort out my thoughts on whether or not to continue having a separate listing for the Cleveland Indians cards in that set.

Hage’s collector Eric Smith earlier reported to my predecessor Don Fluckinger a handful of additions to the 1949-51 Hage’s Pacific Coast League sets, and they are scheduled to appear in the 2010 Standard Catalog. Among the newly reported cards was a 1951 Harry Simpson.

Simpson is in a subset of ’51 Hage’s that was issued during a weekend exhibition series at San Diego’s Lane Field between the PCL Padres and their parent club, the Cleveland Indians at the end of spring training.

He is the eighth Indians’ player known in that subset, all of whom had strong ties to San Diego. Four of them – Al Olsen, Simpson and George Zuverink – had played for San Diego the previous season. Four others – Allie Clark, Luke Easter, Jesse Flores and Al Rosen – had played there in 1949. The eighth, Ray Boone, had been born and raised in San Diego.

Because they were probably found in the ballpark popcorn boxes only during that exhibition series and possibly a few days thereafter, the Indians cards are scarcer than the rest of the 40+ cards in the set, and because of increased demand (since they picture major league players), the Indians in ’51 Hage’s sell for 3-4X the “common” Coast Leaguers in the set.

There really aren’t that many vintage minor league sets that also include contemporary major leaguers. In fact, the only other such issue that springs to mind is 1910 Clement’s Brothers Bread, which includes big league stars like Ty Cobb, Hal Chase and Addie Joss along with the Rochester Bronchos players who make up about half the set.

But the catalog doesn’t list the Clement’s major leaguers in a separate listing, so it really should be one way or the other. Do you have any preferences? Enter a comment or e-mail me at scbcguy@yahoo.com. 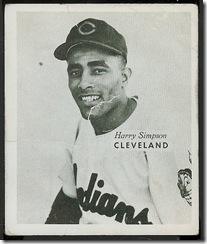