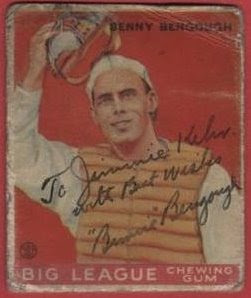 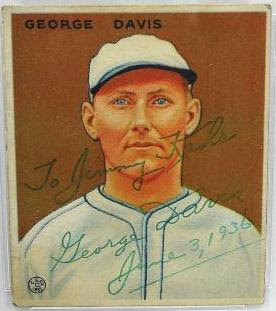 Two autographed 1933 Goudey baseball cards that apparently had their origins in a (presumably) young fan's passion for baseball player autographs more than 70 years ago have been serendipitously reunited in the collection of an Illinois man.
The 1933 Goudey baseball card set is one of the iconic issues of that golden age in the early years of the Depression when bubblegum manufacturers conceived of the idea of pairing their confectionery product with baseball player cards in an effort to persuade youngsters to part with their pennies.
Few vintage card collectors today contemplate the challenge of completing the set, daunted by the existence of four Babe Ruth cards and two Lou Gehrigs . . . not to mention the almost mythic Napoleon Lajoie card that was never issued until a year later, presumably in an effort to keep youngsters spending their money in an impossible quest to find card #106. Today the Lajoie card in anything but the worst surviving condition sells for $25,000 or more.
Collector Sean Brennan is not only piecing together a 1933 Goudey set, he is attempting to do so with every card bearing the authentic autograph of the pictured player. Typical of the cards Brennan buys in pursuit of his goal was that of George "Kiddo" Davis, card #236 in the set. He picked up the card for $41 in an eBay auction in late July. The card had been encapsulated in plastic by third-party authentcation service PSA, and the signature on the card's front, which reads, "To Jimmy Kahs / George Davis / June 3, 1936", has been adjudged genuine by the grading service's autograph specialists.
It was only after receiving the Davis card that Brennan recognized the name on the personalization as being the same as on a card already in his collection. The #1 card in the 1933 Goudey set, Benny Bengough, carries a similar inscription. The Bengough card with which the Davis was reunited in Brennan's collection is inscribed "To Jimmy Kahs / with Best Wishes / "Bennie" Bengough".
It would be interesting to know how Master Kahs acquired his autographed bubblegum cards in the mid-1930s. On June 3, 1936, when Davis signed his card, he was a utility outfielder with the New York Giants, who were playing the Cubs in Chicago. It is possible that Jimmy Kahs got his card autographed as Davis made his way into or out of Wrigley Field, or possibly at the team's hotel or the train station. Or the card may have been in a batch of fan mail that Davis carried along to answer on the road trip.
Without the inclusion of a date in the inscription on the card he autographed "To Jimmy," it's difficult to even speculate on how the youngster got his card autographed by Bengough. By the time the card had been issued in the spring of 1933, Bengough had played his last game in the major leagues and was back in the minors with Milwaukee. In 1934 he began the season with Little Rock, then took over as playing-manager for the Washington (Pa.) Generals in a Class D league through 1935. He was player-manager for the Class C Joplin (Mo.) Miners in 1936-1937. After a copuple years apparently away from Organized Baseball, Bengough returned to the major leagues as a coach with the Senators (1940-1943), Braves (1944-1945) and Phillies (1946-1958).
Brennan describes his acquisition of the Bengough card as "the deal of a lifetime." He saw the card several years ago on eBay from a seller who was disposing of a set of 1933 Goudeys. Noticing that Bengough, the #1 card in the set, was autographed, Brennan contacted the seller and arranged to trade him a similar condition Bengough sans signature, along with $150, for the autographed card.
The Davis-autographed card is the 172nd different card from the 1933 Goudey set that Brennan has acquired since he began the project around 1988. The Davis card leaves Brennan just one short of having an autographed 1933 Goudey of every player who died after 1975, with the exception of card #114, which pictures Luke Sewell in a full-body pose. Sewell also appears in the set as card #163, in a portrait pose, which Brennan already has in his collection.
He has nearly 50 different autographed 1933 Goudey cards of players who died prior to 1970, the "earliest" being Johnny Welch, Cubs/Red Sox pitcher who died in 1940. Brennan considers the "holy grail" of his quest to be Earl Clark, a reserve outfielder for the Boston Braves who died in 1938. Except for Clark, Brennan said he has seen nearly every other card in the set in signed form.
Even the key Lajoie rarity is known to have survived in at least one autographed example. A signed Lajoie, dated 1936, was sold in the 1999 auction of legendary collector Barry Halper, where Brennan recalls that it sold for $27,000.
Like most collectors, Brennan has regrets about the "one that got away." He recalls, "The best deal I ever passed up was in about 1989 when someone had all four Ruths signed for $2,400. Of course this was before authentication so God only knows if they were real."
Brennan has yet to add any of the four '33 Goudey Ruths to his autographed set, nor either of the Gehrigs, though he does have 38 Hall of Famers' cards out of 54 in the set. He recognizes that he will likely never complete the 240-card set in autographed form and said his realistic goal is to get to 200 autographed cards.
Persons wishing to contact Sean Brennan about his unique quest are invited to email him at milkit1@gmail.com.