Variations that one collector may view as insignificant minutae may be viewed by another collector as a fresh challenge to completing a favorite-player collection, or an excuse to hunt down and build a parallel version of a favorite set.

In my role as one of the editors of the Standard Catalog of Baseball Cards I admit that I sometimes just shake my head and go ahead and add to the data base newly reported variations, even though I might not consider them to be a big deal. I've always espoused the philosophy that one of the best things about the baseball card hobby is that there is no "right" or "wrong" way to collect. 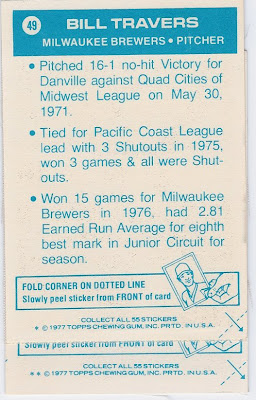 William reports that, as shown here, each of the 55 player stickers in the 1977 Topps cloth set can be found with either one or two asterisks at bottom preceding the copyright notice.

I'm guessing that both * and ** versions were printed on the same press sheet of 132 "cards" that would have yielded two complete sets and two rows of 11 double-prints.

It is unlikely that either version is numerically scarcer than the other, thus I wouldn't expect to see any price differential between them 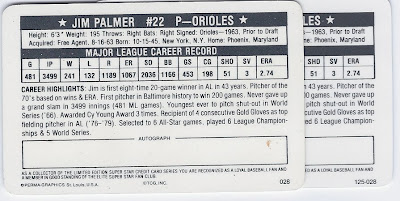 Another full-set variation reported appears in the lower-right corner of the backs of the 1981 Permagraphic Super Stars Credit Cards, in the area of the card numbers.
William points out that each card can be found with and without a "125-" appearing in front of the three-digit card number. He posits that since the corrected (uniform #29) version of the Rod Carew card is found only with the 125-022 number, and the error (uniform #20) with the 022 number, the 125- is indicative of a second, later printing. Sounds right to me.
On this variation, we'll note it in the set's introduction in the catalog, but will take a wait-and-see attitude about whether one or the other version will command a premium price.
As always, your own reports of variations -- accompanied by scans or returnable examples -- are welcome, but remember that my "official" position with the catalog is as vintage (pre-1981) editor, so things that happened much after that date aren't likely to get my priority attention.
Posted by Bob Lemke at 2:18 PM