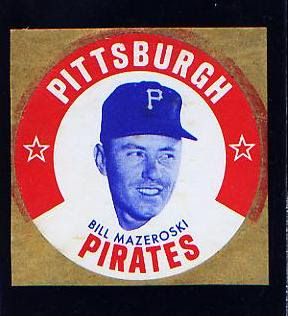 Among his eclectic collecting pursuits, he has been working on an uncataloged set of baseball player stickers known as Sports Heroes. These red, white and blue 2-3/4" diameter stickers were on my radar back in the 1990s, but a catalog listing was never actively pursued because of a complete lack of information as to the extent of the set.

Larry, with an assist from sports memorabilia auctioneer Bob McGann of Pennsylvania, now seems to have a handle on what was issued . . . almost.

According to McGann, the stickers were issued circa 1964-65 by Hunter Publishing Co., Winston-Salem, N.C. Besides their suitability to be used as wall, notebook, locker, etc., decorations, there were cardboard display pages issued on which the stickers could be placed.

It now appears that only three teams are represented in this issue: Tigers, Pirates and Yankees.
Larry believes that there were four players issued in each team set. He is lacking only one Tiger to complete the set.

Naturally, we're looking to identify (via photocopy or scan) the missing Detroit player. If you can help, please e-mail me at scbcguy@yahoo.com. Thanks much!

UPDATE!
We have received a report from collector Ed Ford that another team, the St. Louis Cardinals, is represented in this set, as well.

Ed reports that he has Sports Heroes stickers of Curt Flood and Ernie Broglio. There are probably two more Cardinals yet to be found.
Posted by Bob Lemke at 2:39 PM