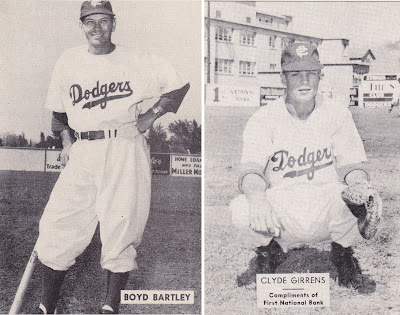 One of my favorite areas of collecting and cataloging has always been vintage minor league baseball cards. I am particularly fond of the more than two dozen team sets issued circa 1951-54 by Globe Printing Co., of Fresno, Calif.
I particularly like the Globe card sets because they are primarily focused on the lower levels of Organized Baseball. Most of the players included in those sets never had so much as a cup of coffee at the major league level, and for most of the players, the Globe issue is their only baseball card.
One of the significant challenges about collecting Globe minor league cards is that they are nowhere near being completely cataloged. We don't know how many teams are represented, and we don't have complete checklists for most of the teams that are cataloged.
Globe's business model appears to have been along the lines of traveling the length and breadth of minor league America selling teams on the concept of issuing baseball cards as a promotion to bring fans into the ballpark. While more than a few teams appear to have issued their cards in complete sets, usually sponsored by a local business, most seem to have distributed them a few at a time over the span of several different games, making complete sets virtually impossible to assemble today. Globe also produced "Souvenir Albums," which are really card-sized images in booklet form, for a few teams, along with albums in which the single cards could be mounted.
All Globe cards share an identical format. They are printed in black-and-white, blank-backed on fairly thin cardboard. The size is about 2-1/4" x 3-3/8". The Globe photographer seems to have favored nearly full-length poses or posed action shots. Which is great, because it gives collectors a great look at the old uniforms and, especially, the old ballparks. Most cards have only the player name in a white strip at bottom. Some cards have a sponsor's name in a white box, along with the player identification.
The rarity of Globe Printing minor league cards cannot be understated. Most are known in only a single example. Fortunately for the true collector, demand is also fairly low for these cards, keeping prices at a modest level.
Another factor in the limited appeal of Globe cards is the non-star status of most of the players who appear in the sets. As mentioned, most of the players were career minor leaguers, with only a handful of future major league semi-stars sprinked among the sets: Charley Lau, Ken Aspromonte, Dave Garcia, etc. Some teams had former major leaguers, including Pepper Martin and Lefty O'Doul, as managers. Also seen among the issues are a handful of aging former Negro Leagues players such as Sam Hairston and George Handy.
It is fun to speculate on how high the bidding would go if a Globe card of a real superstar was to be discovered, such as Henry Aaron with the 1952 Eau Claire Bears. That's not so far-fetched, since Globe did make its presence known in Wisconsin, with a 1952 Oshkosh Giants set.
Through the courtesy of Oklahoma collector Glen Turner, we are now able to add two more teams to the line-up of Globe Printing minor league sets. Today we'll present the larger of his two "finds," the 1952 Ponca City (Okla.) Dodgers, of the Class D Kansas-Oklahoma-Missouri League.
Glen's Globe cards came to light via a colleague who grew up in Ponca City and whose mother recently passed away. In squaring away the household, Glen's friend found his old Robin Hood and Zorro cards, while his older sister found the Globe P.C. Dodgers cards that she had acquired while attending games back in the day.
The 1952 season was the K-O-M League's final year, having lasted just seven seasons. Ponca City had joined the circuit when it expanded from its founding six teams to eight in 1947. The team was a Brooklyn Dodgers farm club during its entire run in the K-O-M.
Probably not unlike many other Class D minor league teams in that era, the only former or future major leaguer on the roster was the manager, Boyd Bartley, who also played third base. Bartley had been a star at Illinois University from 1941-43. He had played in nine games at shortstop for Brooklyn in 1943, while Pee Wee Reese was in military service. He hit just .048 before being sent down to Montreal, then going off to war himself. After the war he played for Ponca City 1947-49. He was out of OB in 1950-51 (possibly again in uniform during the Korean War), then returned to Ponca City for 1952. After the K-O-M League folded, he managed three other Dodgers Class D teams 1953-56.
Glen has turned up nine Ponca City cards from the 1952 Globe team issue. If the set was typical of Globe issues, there are probably at least nine more cards to be accounted for. The P.C. cards are different from other Globe sets in that eight of the nine cards we have seen are "sponsored" by seven different local businesses. The only exception is Bartley. This probably indicates the cards were distributed one or two at a time on the sponsors' different nights at Conoco Park.
Here is the checklist, so far as is currently known:
Tomorrow we'll cover the single card that Glen turned up from another Globe Printing Co. set.