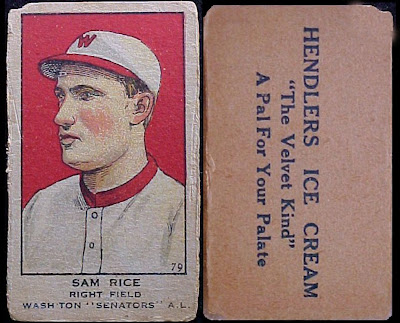 The 10-for-a-penny strip card set of the early 1920s that has become the most popular in the card hobby is the 120-card issue that was designated W514 by Jefferson Burdick in the American Card Catalog. The set was issued from 1919-1921, as evidenced by several team-change variations found on the cards.

The popularity probably stems from three principal attributes of the set: 1) At 120 cards it is large enough to include not only the top stars of the day, but also more of the journeyman ballplayers; 2) Among the color artwork genre of strip cards of the era, the images on W514 are, while by no means photorealistic, at least not cartoonish in their player depictions, and, 3) The set contains career-contemporary cards of seven of the "Eight Men Out" Black Sox, lacking only Fred McMullin for a complete rogue's gallery of those banned for life for throwing the 1919 World Series.


While not particularly rare, the W514 set is a challenge to complete, especially in anything approaching "investment" grade. The Standard Catalog of Baseball Cards indicates that, at least theoretically, an outlay of about $30,000 would be required to acquire the set in Near Mint condition.


What are rare are W514s that, instead of the blank backs expected of strip card issues of that time, bear contemporary advertising from promotions-minded retailers or consumer goods manufacturers who saw the baseball cards as an inexpensive advertising vehicle, especially for products appealing to children. For a minimal investment in strips, or possibly uncut sheets, of the cards, they could be converted to colorful, collectible giveaways by a quick trip to whatever was the local equivalent of a Kinkos in the 1920s for a fast overprinting of the otherwise blank backs.

It is unknown whether the ad-backed W514s were issued when the cards were new, or whether the overprints were added later in the decade to allow local companies to compete with larger national or regional companies that had their own baseball cards.


For a number of years, a version of W514 that carries ads on back for Mother's Bread has been included in the Standard Catalog of Baseball Cards. For the 2011 edition, two more such ad-back versions of W514 will be added to the "Big Book," with the possibility of a third also joining the line-up.


The first, and more common (if you can call five verified survivors "common") ad-back W514 was overprinted to promote the sales of Hendlers (no apostrophe on the cards) ice cream. Hendlers cards originated in the Baltimore area where their issuer, Hendler Creamery Co., sold ice cream from at least 1905 into the late 1960s. The creamery was one of Baltimore's most successful Jewish-owned businesses of the early 20th Century. The company was sold to Borden's prior to 1932.


The company's long-time slogan for its ice cream was, "The Velvet Kind," and that line appears on each of the handful of known Hendlers baseball cards. Each card also exhibits a second slogan. Those known so far are:


Naturally, if you can add to this list, please do so by sending a scan for verification. The Hendlers card pictured herewith is courtesy of Virginia collector Val Kehl.


The second type of ad-back W514 to be reported has on back an advertisement for Barker Bread. Specifically, all known examples have a three-line message: Safe at the Home Plate / Eat / Barker Bread.

Unlike the Hendlers cards, nothing is known definitively about the issuer of the Barker Bread version of W514. Period advertising exists for Barker Bread, a Santa Monica, Calif., baker, but it is not known whether this was the baseball card advertiser.

Veteran type card collectors indicate that examples of either of the overprinted W514s should easily support a multiplier of 6-8X the same player's card in the same condition from the "plain" W514 issue.


As always with overprinted cards, collectors should be especially cautious when contemplating purchase. With the proliferation of scanning and printing hardware available today, producing a bogus ad-back W514 would not be too great a challenge. It is helpful to closely examine such purported rarities to determine whether the overprint was applied before or after the card saw circulation.

That being said, next time out we will tackle a third type of overprinted, ad-back W514 . . . a type that by no means has universal agreement as to its authenticity.