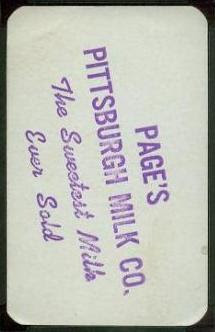 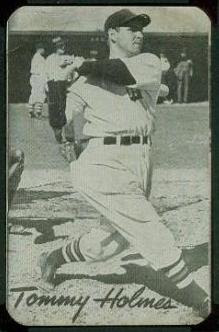 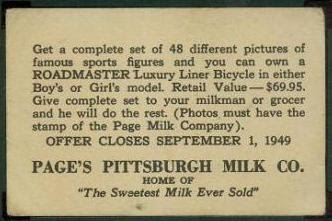 While the Page's Pittsburgh Milk Co. card set has been "cataloged" for more than 35 years -- in the sense that it was listed in the old Sports Collector's Bible -- we were never able to pin down the details for an updated listing in the Standard Catalog of Baseball Cards.
That has changed with information provided by Texas type-card specialist Leon Luckey, who recently published on his vintage baseball card forum, Net 54 (http://www.net54baseball.com/, the definitive on-line community for serious pre-war card collectors) an example of the Page's milk card. More importantly, he also published the "offer card" that was issued with the cards to explain the promotion 60 years ago.
Many collectors will recognize the Page's milk card as a parallel of the set best known in the hobby as 1947 Bond Bread. In reality, both sets are part of a line-up of collectibles featuring the same photos in a variety of formats. There are 2-1/4" x 3-3/8" round-cornered cards (44 baseball, four boxers), 2-1/4" x 3-1/2" square-cornered cards with white/gray backs (same 44 baseball players and four boxers), 2-1/4" x 3-1/2" square-cornered cards with beige backs (22 baseball players, two boxers[and recent, circa 2000, counterfeits thereof]), 3-3/8" x 5-3/8" exhibit-size (45 baseball players), 3" x 5" (presumably 45 baseball players), 6-5/8" x 9" photographic premiums (44 baseball players, four boxers) and perforated, two-sided 2-1/4" x 3-1/2" (22 baseball players, two boxers, with western movie stars on the other side).
We know these collectibles are all related because they share the same photos and script-name identifications on the front, including a few misspellings: "Bobbie Doerr, Cid Gordon, Larry Janson, Johnny Vandermeer."
A great deal about these cards remains unknown, and what is known is clouded by rumor and misinformation.
All have some connection with the Harry M. Stevens Co., of New York, the major producer of baseball year books and concession stand player picture packs in the late 1940s and early 1950s. It is likely Stevens was the source of the photos used on the cards and premiums.
It is likely that at least the 2-1/4" x 3-3/8" (and 3-1/2") cards, whether round- or square-cornered were actually manufactured by Aarco Playing Card Co., Chicago. Aarco was, in the late 1940s, the second- or third-largest manufacturer of playingcards in the U.S. They had been in business since at least 1938 and were sold to the industry leader, United States Playing Card Co., Cincinnati, in 1987.
From the player selection and uniforms, it is evident the first of the baseball cards were produced in 1947, when anecdotal evidence shows the round-cornered cards were inserted into loaves of Bond Bread, a national brand that was sold around the country in about the same geographical area in which major league baseball was played at the time. This version was designated D305 in Jefferson Burdick's American Card Catalog.
Contemporaneously, or perhaps a year or two later, the square-cornered versions of the cards were being sold in four boxed series of 12 cards each, labeled "Sport Star Subjects." This version is labeled W571 in the ACC.
In 1974, just over 3,000 sets of two of these square-cornered series were found in a warehouse and sold into the hobby. There is much disagreement as to whether these warehouse-find cards were from the same printing as the boxed-set issue, or were a later reprinting. Regardless, the end result was that half of the square-cornered cards are now much more common than the others. And don't even get me started about the recent counterfeits of those 24 cards. Aarco also produced other small boxed sets of similarly formatted cards of movie stars and other athletes, with the small boxes labeled "Collectors & Traders."
In 1949, the round-cornered cards, all 48 of them, were used in another promotion, this time by Page's Pittsburgh Milk Co. (presumably proximate to Pittsburgh, Pa.) As can be seen on the offer card distributed with the player cards, a complete set of the cards bearing the Page's rubber-stamped printing on back (which is known in both purple and black ink) could be redeemed for a high-end bicycle. It should also be assumed that to avoid giving away too many bicycles, one of the 48 ballplayer/boxer cards was intentionally distributed in short supply. However, since surviving Page's-backed cards are so rare, we'll probably never know which was the short-printed card.
We will be adding the Page's Pittsbugh Milk Co. set to the 2011 Standard Catalog. Perhaps my then we'll have taken the time and made the effort to reorganize the other related issues that are, in conformity with current hobby practice, lumped together as Bond Bread issues.