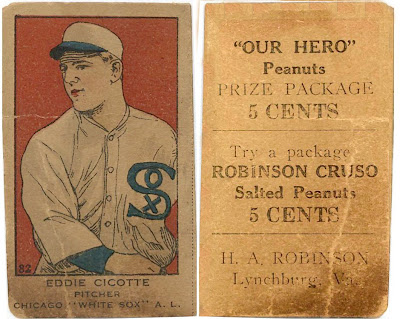 Last time around we presented a couple of previously uncataloged (at least by us) advertising-back versions of W514. Here's the third ad-back version, as promised.
This type of ad-back W514 is known in within the hobby in only one, or possibly two, surviving examples. Fortunately for the card's owner, veteran W514 collector Bob Zych of New York, the player on the front of this card is Black Sox pitcher Ed Cicotte. This card bears on its back the advertising of a Lynchburg, Va., peanut company, H.A. Robinson.
Perhaps it is because this virtually unknown back is found on a Black Sox card, but there are those in the vintage card community who are not convinced this is a legitimate, circa early-1920s, overprint.
I am on the fence, but leaning towards legitimate, for the following reasons . . .
If the Robinson Cruso brand rings a bell, it might be becuase the brand still exists today as Robinson Crusoe (now with an "e") Salted Home-style Virginia Peanuts, and was on the list of peanut products recalled in the salmonella scare earlier this year. The brand is now the property of Peanut Corporation of America, which is in bankruptcy and the subject of numerous pending criminal and civil investigations as a result of it being "ground zero" for the salmonella outbreak.
Besides the aforementioned appearance on a "star" card that is so low-grade as to not risk losing much value if it was proven to be phony, the nagging doubt I can't quite shake is that there is a decided lack of corroborative, verifiably vintage, advertising for the two named peanut brands. A company that went to the trouble to create baseball cards to promote its product was certainly savvy enough to have used other types of promotions and premiums, yet these are not to be found by the casual researcher.
Here is where I'm currently at in terms of listing this set in the Standard Catalog . . .
I will withhold such "sanctification" unless or until more definitive proof of legitimacy is forthcoming. This could be accomplished by my having the opportunity to microscopically examine the subject card, or preferably more than one, to determine whether the advertising on back was printed before or after the card was circulated.
Listing a card or a set in the hobby's premier reference book is a bell that can't be unrung. Even if it was listed, then taken out if/when evidence was forthcoming that it was not legitimate, much damage to the hobby's body of knowledge would have been done.
Obviously, if you can provide any new information, or samples for study, contact me.
Posted by Bob Lemke at 2:06 AM