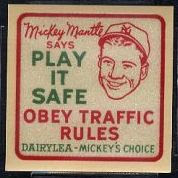 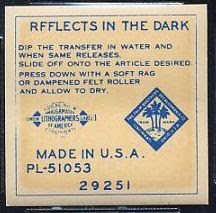 I don't know if this item will make it into print in the 2011 Standard Catalog of Baseball Cards, but at least it will be in the data base.


With space in the print edition at a premium, it is less likely with each passing year that an item that is not an actual baseball card, or very close to the traditional definition thereof, will be added. By getting such things into the data base, however, we can include them in any expanded DVD version of the book.

This decal, measuring about 2-1/4" square, has only recently begun to show up in any quantitiy in the market. I attribute this to the discovery of an original hoard, rather than modern fakery.

There no way to accurately date the release of the decal; the last half of the 1950s seems like a good bet.

I've seen this decal being sold in slabs from both Beckett and SGC. Prices seem to vary from $90-200, but I'd bet they come down some as more of these make their way into the hobby.