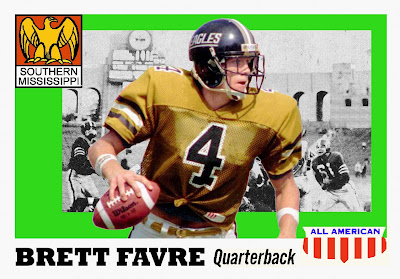 To satisfy demand from a couple of Brett Favre's new fans in Minnesota, I had occasion to go "back to press" and print up a few more of my 1955 Topps All-American style cards depicting him in his days at Southern Mississippi.

I had originally created this card after Favre's first retirement and prior to his comeback with the Jets, so the write-up on back is a bit outdated. I've decided not to rewrite the back copy unless or until he finally retires.

But in looking over the card back, I 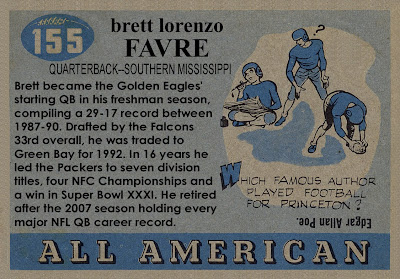 notice that I have been guilty of perpetuating the myth that Edgar Allan Poe played football for Princeton.

As with all of the cartoons on the backs of my "Second Series" All-American cards, this one is a direct pick-up from an original 1955 Topps card. The only changes I made to the cartoons in my #101-200 series was when a rule change had affected what Topps had written in '55, or somebody had broken a statistical record they had originally quoted.

The Topps writer back in 1955 must have been confused by the fact that in Princeton's early football history, some of its most famous players WERE named Poe. They were the six sons of Maryland attorney general John Prentiss Poe, who was a cousin of the mystery/macabre writer.

If I ever have occasion to need more of my '55-style Favre cards, I'll rework the cartoon to correct the Poe football myth.