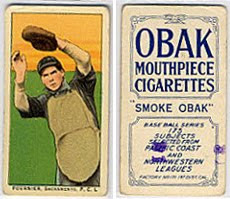 Back in the early 1980s I thought I'd combine my interests in minor league baseball and vintage baseball cards by assembling a collection of the Obak cigarette cards that were distributed on the West Coast in 1909, 1910 and 1911.I didn't realize it then, but those cards are so much rarer than most of the contemporary T206 cards from "Back East" that putting together complete sets of the Obak could take decades to accomplish -- and that's if a guy had more money than God to buy the cards when they became available.At about the time I started my Obak collection I also started researching the players who appeared in the sets. Over the course of several long Wisconsin winters I pored over microfilms of The Sporting News and The Sporting Life from the period several years before to several years after the Obak cards circulated, making prodigious notes on 3x5 file cards for each player in the set.I gave up trying to collect the T212s (that's the catalog number Jefferson Burdick assigned the three sets in the pioneering American Card Catalog in 1939), long ago, and have since sold off all my Obaks, one-by-one, first on eBay, then on the Net 54 baseball card forum. As I was selling each card, I included interesting tidbits about each player from my notes. The bidders seemed to like learning a little bit about these guys on the cards, so I thought I'd now begin sharing their stories here.
Jacques Fournier, the faux French first baseman
While he was born (1889) in the wilds of northern Michigan's lower peninsula on the shores of Lake Huron, and though he was known during most of his professional career as "Jacques," John Fournier was an all-American boy. It is not recorded how he got from Michigan to Washington state, but by the age of 18, after working at a livery stable and as a railway messenger in Aberdeen, he turned pro in 1908 with Aberdeen/Grays Harbor in the Northwestern League, as a catcher, as he is depicted on his 1910 Obak, his only appearance in that cigarette card series.
He spent his first four pro seasons in the Pacific Northwest, with nine teams in five leagues. Twice he played for two teams in the same city in the same season. In 1909 he split time between the Portland Colts (Class B NWL) and the Portland Beavers (Class A Pacific Coast League). In 1910 he played for both the Class D Sacramento Baby Senators (California League) and the Class A Sac'to Senators. He also played for Aberdeen that year.
By 1911 Fournier had raised his batting average from the .210s to the .250s, and switched to first base. He played most of 1911 with the Moose Jaw "Robin Hoods" in the Western Canada League, a Class D affair, where he hit .377 before moving up to Class A Vancouver, from whom he was purchased by the Boston Red Sox.
Prior to the 1912 season, he was sold to the Chicago White Sox. He made his big league debut with the ChiSox, but was hitting under .200 when he was farmed out to Montreal. Back in Chicago in 1913, he was Hal Chase's understudy at first base, then claimed the first-string job in 1914. He led the American League in HR percentage that year, hitting six in 118 at-bats. He led the league in slugging in 1915 with a .491 SA. In 1917 he lost his big league job to future Black Sox Chick Gandil, and, except for a month with the New York Yankees in 1918, spent the 1917-1919 seasons back in PCL with Los Angeles, batting .319. On Aug. 10 that season, he got into a fight with umpire Red Held and threw his glove, hitting the arbiter in the face. Fournier was fined $50 and suspended for a week.
It was back to the bigs in 1920, when Fournier was bought by the St. Louis Cardinals, where he batted .317, before being replaced by future Hall of Famer Jim Bottomley. He was traded to Brooklyn prior to the 1923 season.
Fournier played four years with the Robins. He averaged a strong .337 BA in that period, but in his final year there, with Babe Herman contending for his job, he was released. They didn't have to throw any benefit for Fournier, though, as he reportedly made $75,000 in 1925-1926 during the Florida real estate boom.
He caught on for a last major league season in 1927 with the Boston Braves, but again lost his job to a Hall of Famer, George Sisler. He left the majors with a career batting average of .313 in 1,530 games over 15 seasons.
Fournier played in 1928 for the Newark Bears in the International League, batting .288 with 22 home runs at the age of 38.
After hanging up the spikes, Fournier coached the UCLA baseball team in 1934. He returned to pro ball as a manager in the St. Louis Browns system with Johnstown in 1937 and Toledo in 1943. He later scouted for the Browns. Fournier died in 1973 in Tacoma.
Besides the 1910 Obak pictured above, Fournier appeared on many other baseball cards during his playing days. On the card above, notice the purple ink rubber-stamped on back. Though the reason is unknown, many Obaks, particularly those of 1910-1911, are found with two-digit numerals on their backs, always in purple.
Posted by Bob Lemke at 9:15 PM