A Picture to Beat the Summer Heat 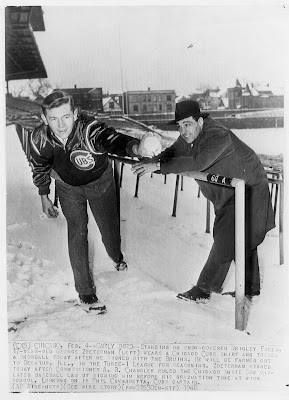 With much of the country in a heat wave, I thought I'd try to give you a bit of a break by sharing this old press photo.
The picture is dated Feb. 4, 1948, and was taken at a snow covered Wrigley Field in Chicago. It shows Chicago high school phenom George Zoeterman demonstrating his four-seamer with a snowball for Cubs' captain Phil Cavaretta. The Cubs had just signed Zoeterman in a 12-team bidding war, but there was way more to the story than that.
The 5'11", 172 lb. left-hander had been a prep star at Chicago Christian High Scholl, where he had pitched two no-hitters in 1946 and two more in 1947. He signed with the White Sox in September of 1947 for a $1,500 bonus, but Commissioner Happy Chandler ruled that the Sox had violated baseball rules regarding signing of high schoolers, since Zoeterman would not graduate until January, 1948. White Sox GM Leslie O'Connor, claiming that since Zoeterman was a private-school student, the rule didn't apply, dug in his heels and Chandler suspended the White Sox from the American League for nearly two weeks until the team paid a $500 fine and voided Zoeterman's contract.
After he was again a free agent, Zoeterman said he received offers from every big league team except the Reds, Giants, Senators and, of course, the White Sox.
Zoeterman began his pro career with Decatur in the Three-I League in 1948. His record in 20 games was 3-5 with a 6.37 ERA. Nonetheless, the Cubs sent him to California to get an early start on the 1949 season with Los Angeles in the Pacific Coast League. Naturally, the jump from Class B to Class AAA was too much for the youngster, and he pitched only two innings with no decision before returning to Decatur. He again had a losing record in '49, going 8-10 with a 3.74 ERA.
Again opting for an earlier start, Zoeterman was sent to Shreveport of the Texas League to open the 1950 season. The 20-year-old had a 1-2 record in seven games, then was sent back up north to Springfield, the Cubs' AAA farm in the International League, where he was 0-2 in nine games.
Zoeterman ended his career in Organized Baseball in 1951 with Grand Rapids in the Class A Central League, where he was 4-4 in 21 games. He washed out of pro ball at the age of 21 with a minor league career record of 16-23.
George Zoeterman died in 2001.
He never appeared on a baseball card. I bought this photo because it pictures a really great piece of Cubs' memorabilia, the leather jacket with the team logo. That would be a premier item in today's market.