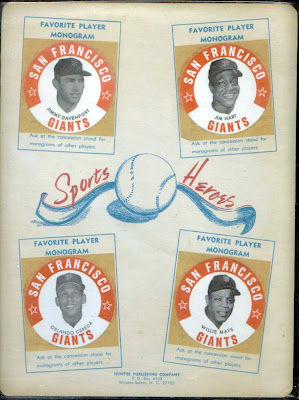 In our Aug. 24 posting we opened the topic of the 1964-65 (exact date of issue uncertain) Sports Heroes stickers from Hunter Publishing Co., Winston-Salem, N.C. Actually, we should probably catalog them as Sports Heroes Monograms, as that's how they are described on the sheet on which they were issued in team sets of four players.


We can now update the checklist with a quartet of San Francisco Giants reported to us by Jim at 707 Sportscards. Unfortunately, the players: Jim Davenport, Jim Ray Hart, Orlando Cepeda and, of course, Willie Mays, can't help pinpoint the date of issue, since they were all with the Giants in both seasons.


Also yet to be determined is the full extent of the issue. We have so far seen that team sets were issued for the Detroit Tigers, New York Yankees, Pittsburgh Pirates and St. Louis Cardinals, besides the Giants.

On a related note, Jim reports that he has seen the Mickey Mantle sticker with two sizes of the portrait.

As always, if you can add to the checklist with a scan or photocopy, please enter a comment here, or email me at scbcguy@yahoo.com.
Posted by Bob Lemke at 1:56 PM