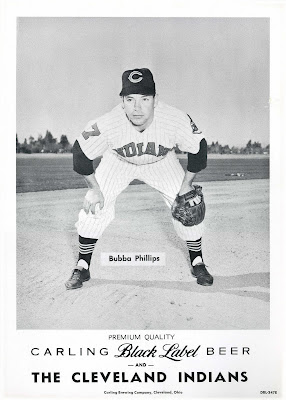 It's probably been more than 10 years since we added the 1955-61 Carling Beer Cleveland Indians premium pictures to the Standard Catalog. I'm embarrassed now to admit that I don't remember who provided the checklists and photocopies for the first listings.

The premiums all share a similar format. They are 8-1/2" x 12," blank-backed, printed on semi-gloss thin cardboard stock. Pictures are almost all posed action shots. The wide borders at bottom have advertising for Black Label beer. The premiums were probably distributed as over-the-counter handouts where the beer was sold.

A small alphanumeric designation with a "DBL" (most years) or "LB" (1961) prefix in the lower-right corner allows us to differentiate between years of issue.

Now, thanks to collector Glen Van Aken, we have a start at a 1960 checklist. He sent a scan of Bubba Phillips, who had been traded from the Tigers to Cleveland for 1960. The Phillips premium has the number DBL 247E (as opposed to DBL420 in 1961). Unlike earlier Carling issues, which had a line of type at bottom listing the brands regional brewery locations, the 1960 premium lists only Cleveland. That format was continued in 1961.

We'd be especially happy to hear from you if you can add any pictures to our checklists for this issue.
Posted by Bob Lemke at 7:33 AM