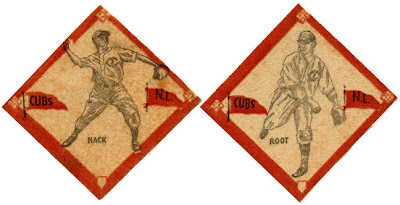 As has been the case virtually edition since we began listing the 1937 BF104 (American Card Catalog designation) felt blankets a decade or so ago, we are able to make an addition to the checklist for the 2011 book; this time through the courtesy of Roger Marth.
Roger sent the scans above of newly reported BF104s of Chicago Cubs Stan Hack and Charlie Root.

Not nearly as colorful as the earlier-generation 1914 BF2 blankets, the 1937 version are much scarcer. It is likely that for most of the 32 known players, only the example that was used to verify the report to the Standard Catalog exists in hobby hands. That makes quite a challenge for single-player specialists. Even when a specimen becomes available, it can get quite pricey. BF104s in VG condition can bring $100-200 for even a "common" player.

While the checklist currently contains a number of the bigger stars of the day, such as Hank Greenberg and Dizzy Dean, the really top names, Lou Gehrig and Joe DiMaggio, have yet to be reported.
Posted by Bob Lemke at 2:48 PM