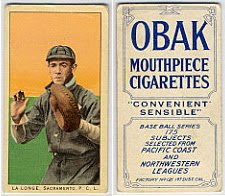 Lewis W. "Mickey" LaLonge had a long career (1906-1924) as a catcher in the higher levels of the minor leagues in the U.S. and Canada, but never had even a game at the major league level, probably because he was a lifetime .250 hitter, who never had more than three home runs in a season.

He moved east to play for Buffalo in 1913-1915 in the Class AA International League. He split time between Louisville and Columbus in the American Association in 1916, then went back to the IL with Toronto in 1917.

He was signed by Kansas City for 1918, but jumped to the "outlaw" Steel League with Lebanon, Pa. He returned to OB with K.C. in 1919, his last year in the upper reaches of the minors. He again jumped his contract with the K.C. Blues in 1920, to play independent ball at Oil City, Pa. and Newcastle (state unknown).

In 1922, LaLonge once again returned to organized baseball as playing manager for Brantford in the Michigan-Ontario League. In 1924 he was the pitching coach for Cornell University, then, at the age of 40 resurrected his playing career at the Class B level with Harrisburg and Wilkes Barre of the New York-Pennsylvania League, and Rocky Mount in the Virginia League, hitting a respectable .306.

LaLonge signed on as a coach with Toronto in 1927. His last known pro ball assignments were as manager in the Pennsylvania-Ohio-New York League in 1939 with Jamestown, and 1940 with London.

In the off-seasons, LaLonge worked a silver mine he owned in Canada.