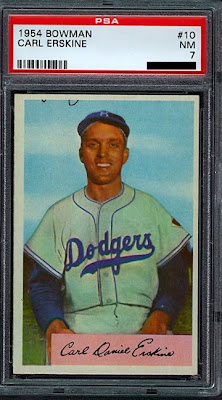 Please excuse my several days' hiatus from new postings to the blog; like many of you I've been sick.
The first order of business is to post this update to the Sept. 24 posting about the variation on 1954 Bowman Carl Erskine, card #10 in the set. You may wish to click on the "older posts" link at the bottom for a refresher on that column.
Basically it boils down to a variation of the Erskine card on which two lower loops of the facsimile autograph of card #2, Jack Jensen, were carried over into the background sky in the upper-left of Erskine's card.
Subsequent to receiving the initial report from 707 Sportscards, I had made a couple of cursory attempts to confirm the variation by checkling scans of Erskine cards posted for sale on various internet sites. I had no luck in those searches.
Now we do have confirmation of the variation, certified (the card, not the variation) by PSA, no less. The card pictured at left belongs to collector Peter Eilenberg.
After having searched 35-50 images of different '54B Erskines without a "hit," I was beginning to wonder if we'd ever turn up a second example. As I told Peter, if you have one of these "with loops" variations, hold onto it, it could be quite rare.
Plans call for the variation to be listed in the 2011 Standard Catalog, but unless we see a couple of them sell at auction, it may initially carry a "Value Undetermined" notice, rather than a "book" price.
Posted by Bob Lemke at 2:27 PM