Not "catalogable," but neat Cardinals collectible 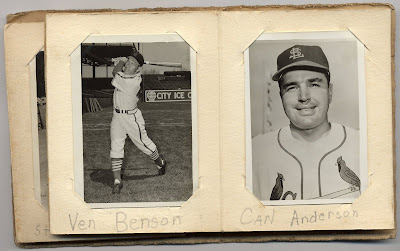 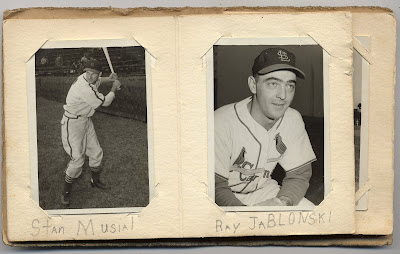 While this great 1950s St. Louis Cardinals collectible will not be included in the Standard Catalog of Baseball Cards (though it would certainly fit if another edition of the SC of Baseball Memorabilia was ever forthcoming), it is certainly worth sharing.

What we have here is an evidently very scarce souvenir photo book of the 1953 Cardinals. It was brought to our attention by Kentucky collector Bobby Bazzell, who has for some time been trying to find any information about it.

What it is, is a small -- about 3-1/4" x 4-1/8" -- thick book of black-and-white glossy portrait and posed action photos of the '53 Cardinals. The heavy cardboard covers are printed in marbled gray, with the front design in red. I had to posterize the cover with Photoshop to make the design show up. As you can see, it has a Cardinals bird logo at center, with the team nickname above and the date below. 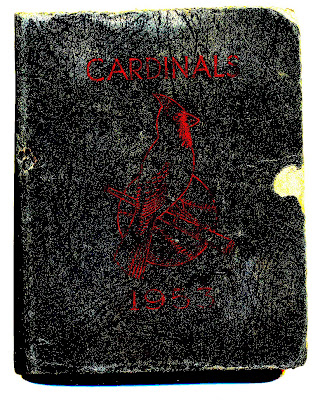 Inside the book are pasted two (or possibly three) sets of accordian-fold page strips. The front and back of each panel is die-cut to allow the corners of a 2-3/16" x 3" photo to be inserted.

There are 29 photos in the book. The tricky part is that none of the photos are identified. There is no printing on the pages to indicate which player's picture should be inserted into which page, nor is the player name printed anywhere on the photos. The posed action photos have some nice stadium backgrounds, and these are not photos that are familiar to me from baseball card appearances or other widespread distribution.

The only identification is names that have been pencilled in, presumably by the original young owner of the book. Besides some misspellings and partial names, however, the kid appears to have gotten some of the names wrong.

It's easy to pick out the Hall of Famers and regulars like Musial, Schoendienst, Slaughter, Mizell, Haddix, etc., but who can identify benchwarmers from the 1953 team like Farrell Anderson, Mike Clark or Jackie Collum.

Bazzell has been giving it the old college try, comparing the pictures in the book with the images on 1952 and 1953 Topps cards, and with the pictures in Bob Broeg's book, A Century of Cardinals Baseball. He still has questions about some of the pictures, though. He sent photocopies of the pictures to the Cardinals Hall of Fame Museum in St. Louis. His identifications in some cases were confirmed, but for other pictures, the museum curator and staff came up with different suggested names . . . and some they couldn't even guess at.

Besides the enigmatic photographs, there are questions still to be answered about the nature of the book, principally: How was it distributed, and how widely?

Just spit-balling here, but I'm not thinking this was a concession stand souvenir or otherwise intended to be sold to the general fandom. Such items generally provided full player identification. The lack thereof makes me wonder if what we have here is an item that was promulgated as a keepsake for the players themselves, or possibly for the press or others closely associated with the club.

If you can shed any light on the origins of this photo book, please comment here or send me an email to scbcguy@yahoo.com.