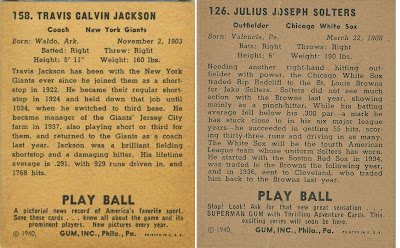 I never collected 1940 Play Ball baseball cards, so it's not surprising I wasn't personally aware of the Superman ad back variations, but I am surprised that in some 30 years of cataloging cards I don't recall anybody else ever mentioning them.

I was recently contacted by reader Mike Guluzzi who had seen a 1940 Play Ball card being offered on an internet sales site that was being hyped by saying it "is the first known example of a 1940 Play Ball baseball card with the very rare Superman ad back."

Guluzzi said he went through his own holdings of 1940 Play Balls and discovered several cards with and without the mention of Superman. Specifically, he mentioned that he has card #159 Frank J. Snyder with and without the Superman ad back. His inquiry was about the range of the Superman backs and whether the hobby considers a 1940 Play Ball set to be complete with one or both types of backs. He also inquired as to whether there is, or should be, a price differential.

Having no familiarity with these variations, I made inquiry on a vintage card collectors' forum and got some quick answers.

All cards in the numerical range of #123-180 can be found with two backs. One back has the common promotional message at bottom on back, "A pictorial news record of America's favorite sport. Save these cards . . . know all about the game and its prominent players. New pictures every year."

Each of those cards, however, can also be found with one of six advertising messages for Gum Inc.'s Superman gum cards. For reasons unknown, cards #121-122, which were printed on the same sheet(s) as #123-180, are NOT found with Superman ad backs. Only one of the various Superman ads is found on any particular card.

More experienced collectors than I indicated that while the Superman version of any particular player's card is noticeably scarcer than the "pictorial record" version, premiums seldom rise to more than about 5-10% higher.


Most hobbyists would contend that a complete set of 1940 Play Balls would include just one each of cards #123-180, without regard to which back appears. A "master set," however, would require both versions of those cards.

These variations should be noted in future editions of the Standard Catalog of Baseball Cards. 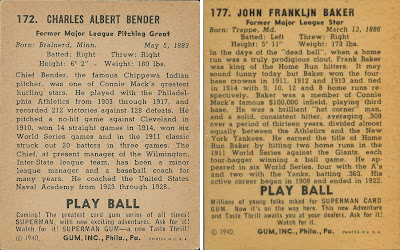