Since it now appears, with the 2011 NFL season more than half over, that Randy Moss is truly retired, I decided to go ahead and finish off my "Second Series" of 1955 Topps All-Americans. 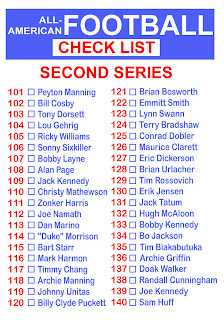 I consider the 100 cards that Topps issued in 1955 to be the First Series. I picked up the process in 2003 with my first All-American custom card, Peyton Manning of Tennessee, which I numbered 101.


Now, 100 cards later, I have completed the Second Series. I have long since produced cards numbers after #200 (what I'm calling the Third Series), but I had been holding the last slot, card #152, in my Second Series for Moss, waiting for him to call it a career so I could write a "final" biography for the back.

Actually, writing the 90-or-so words for the back was one of the more challenging bios I've done. Love him or hate him, Moss had a brilliant college and NFL career.

Here in Wisconsin, there is more than average animosity towards Moss. He was an integral part of the Vikings teams that usually dominated the Green Bay Packers around the turn of the century.

Moss further enraged Packers fans on Jan. 9, 2005, when his 34-yard touchdown catch in the fourth quarter sealed a Vikings victory over heavily favored Green Bay in the Wild Card round of the playoffs. Moss poured salt in the wound in the end zone by pretending to drop trou and moon the Lambeau Field crowd.

Most of those who called for his suspension or expulsion from the league, if not his head, don't realize that Moss' mooning was a bit of an inside joke. For many years Packers fans have milled around the parking lot until the opposing team's buses pulled out after a game, then presented them with a moon en masse. The NFL fined Moss $10,000.

My 1955-style Randy Moss card is the first of perhaps half a dozen I'll create this winter, bringing me well into the Third Series.

Watch for them here. 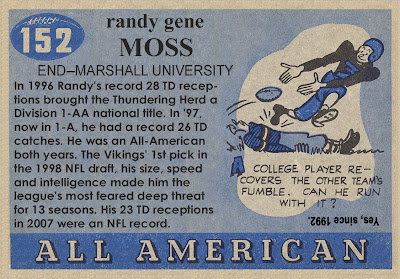