This is a listing that was prepared after thedeadline for the 2012 Standard Catalog of Baseball Cards. It was intended for a future edition, in the Vintage Minor League section of the book. 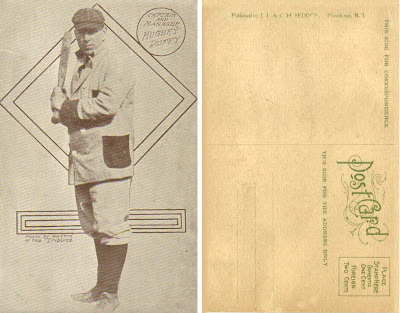 While it is reported that this postcard issue for the Class A Eastern League Providence Grays includes 18 players, the checklist is not known, though it certainly includes many of the former and future major leaguers who were on the team. These might include Harry Lord, Rebel Oakes, George McQuillan, Joe Harris and Bill Abstein.

The black-and-white cards are in about the standard 3-1/2” x 5-1/2” postcard size, with typical markings on back. Fronts have posed player photos and a credit line to “Walford of the Tribune.” The cards were published by J.C. & C.H. Seddon of Providence.