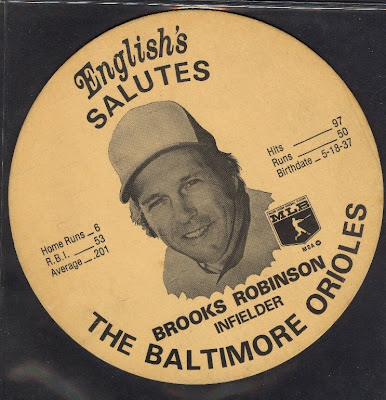 Another former contributor to the "Big Book" (and a major contributor to the hobby by virtue of some work he did in the anti-counterfeiting fight) who has checked in since my return, Scott Roemer, has made a great find that we'll add to the 2011 edition.
Scott, who is a big Brooks Robinson collector, has verified the existence of a Brooks Robby lid in the 1976 English's Chicken Baltimore Orioles Lids set.
Prior to this report, the checklist for the set had stood at just four O's: Mike Cuellar, Ken Holtzman, Lee May and Jim Palmer.
These "cards" are actually the lids for buckets of fried chicken and they measure an impressive 8-3/8" diameter.
The mid-Atlantic chicken chain reprised the concept of lid cards in 1983, and Jim Palmer once again made the set, along with a dozen other Orioles, including Cal Ripken, Jr.
We don't know how deep the English's set issued in 1976 went into the roster, but that was the only year that Reggie Jackson played for the Orioles. I'm just sayin' . . .
Posted by Bob Lemke at 6:33 PM