Perhaps it is because his older brother, Charles "Boss" Schmidt had his major league career at the peak of the tobacco-card issuing era and that he played on three American League championship teams in the 1900s, but baseball card collectors generally are more familiar with Boss Schmidt than with his kid brother, Walter.

In actuality, Walter had a longer and slightly better, statistically, career than Charles, even though he never hit more than two home runs in a season (OK, it was the deadball era) and hit over .300 only once.

Walter J. Schmidt was born in Coal Hill, Arkansas, in 1887. He turned pro with Class D Helena of the Arkansas State League at the age of 21 in 1908. He played with Winston-Salem of the Carolina Assn. in 1909, and with Roanoke of the Virginia League in 1910.

In 1911 he moved west to the AA Pacific Coast League, where he was the first-string catcher for the San Francisco Seals through the 1915 season. He had made his baseball card debut the previous year in the Contentnea (T209) and Old Mill (T210) cigarette series, but in 1911 was pictured on his only Obak card.

After the 1915 season, Schmidt was called up to the big leagues, with the Pittsburgh Pirates, with whom he played nine years before moving on to St. Louis for 1925. He appears on a number of contemporary candy and other card issues from that era.

In 1926, Schmidt returned to the PCL as playing-manager for the Mission Bells. He moved behind the plate for Seattle, still in the PCL, for 1927-28, then ended his pro career back with San Francisco as a 42-year-old catcher.

After retiring, Schmidt evidently remained out in California, where he died in 1973. 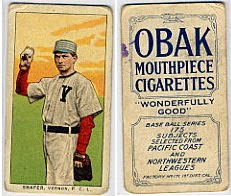 George "Dutch" Schaefer, I struck out on him

Other than the notation that his name was George, his nickname was Dutch, and that Obak misspelled his name as "Shafer," my notecard for this Vernon Tiger is utterly blank.

Thanks to the SABR Minor League database, however, we can fill the blanks on Dutch's pro career. A pitcher throughout his playing days, he compiled a 93-95 record in 10 minor league seasons.

Schaefer began his pro career with the South Bend Greens of the Central League from 1903-05. He remained in that Class B circuit with Wheeling in 1906 and Terre Haute in 1907-08. Those teams had two of the more unusual nicknames in that era. Wheeling was known as the Stogies, and Terre Haute as the Hottentots.

His last year as a pro was 1912, with the Class D Ludington Mariners of the Michigan League.

Even though he was in the PCL for all three years of Obak cigarette card issues, the 1910 card was his only appearance in T212, and probably his only baseball card.