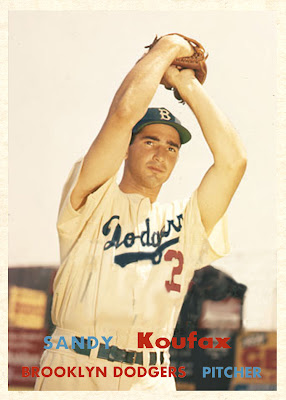 One of the best (at least for us old-guy card collectors) player photos to come out of the Topps Vault series of internet auctions caught my eye and provided the inspiration for not one, but a pair of, Sandy Koufax custom card creations. (The photo also caught the eye of some serious Koufax collector specialists and Brooklyn Dodgers team collectors, and it was bid up to $1,275.)


The image was an original Topps color transparency described as dating from 1957. Indeed, the then-21-year-old Koufax is pictured at the top of his wind-up with some of Ebbets Field's outfield signs in the background.


I'm not going to second-guess the designers at Topps in 1957, who chose to go with a great close-up portrait for the Koufax card in their short-printed Fourth Series. But to me, the photo from the Topps vault just seemed like it would have also made a very nice card . . . so I made one. 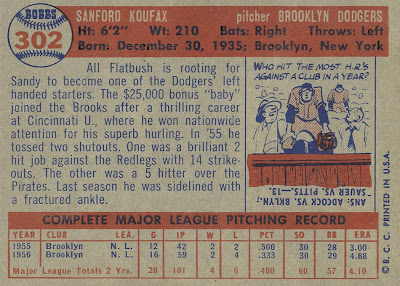 I haven't often, in my several years of custom card making, tried to improve on an actual card from Topps, Bowman, etc. It's my belief that the graphic artists who created those originals so many decades ago, working with what today is viewed as ancient technology -- a roll of rubylith and an Xacto knife -- do not deserve to have their legacy usurped by me and my computer graphics tools.


But the image of the '57-style card that could be created from this newly re-discovered Koufax photo was just too vivid in my mind's eye, so I made it a reality.


As my custom card projects go, this alternative '57 Koufax was pretty easy. I just had to match the name/position/team typography from 1957 and lay it over the photo. On back, I just made a couple of subtle changes so that the card can't be confused with a genuine 1957 Topps issue.


This Koufax alt card represents my first work in the 1957 Topps set, which is surprising since that issue remains one of my all-time favorite basecall card sets. I have several other '57s on my to-do list, including a Stan Musial, who didn't appear on a Topps card until 1958.

Keep you eye on this space to see the other custom card that derived from this great old Topps photo of Sandy Koufax.