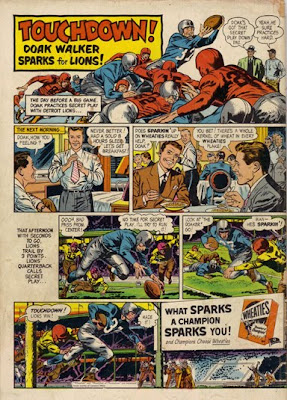 He wrote. "I 'm sure someone will be able to complete the checklist of the Dell comics Wheaties ads for you, but, because I have a number of full comics with printing dates intact, I can shed some light on the timing of these issues.

"There are two obviously separate versions of the Dell rear covers: The 'Sparks' cover on which the athlete (and all other images) is represented by a life-like cartoon drawing, e.g., Doak Walker Sparks for Lions,' and the 'Spark Up' cover which has a color photo of the athlete filling the one quarter of the ad. . . 'SPARK UP... to pick off a baserunner!' says ROY CAMPANELLA.'''

Based on the comics in his collection, Otis believes the cartoon image ads appeared on comics dating from Fall 1952 to Fall 1953. The photo image ads date from Fall 1953 to Fall 1954. "So it appears these ads postdate the Wheaties cereal box cards of 1951 and 1952 by at least a season," he said. 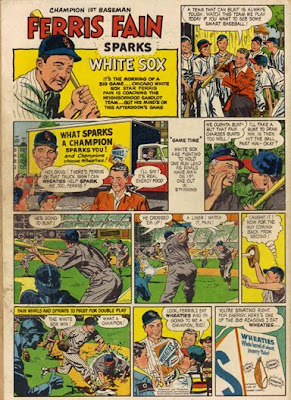 "I am including scans of two photo ad athletes not mentioned in your blog/SCD article (Davies and Fears) and also several scans of the "Sparks" type ads," Otis continued. "Please note the ad featuring Ferris Fain; like Abel he is not part of the 1951-52 club. Also take a look at the Doak Walker ad. It is slightly different than the others yet the Tarzan comic I have dates from January 1953. I think I assembled a full set of both versions several years ago and will try to find any other examples I may have."

The scans that Otis sent were: