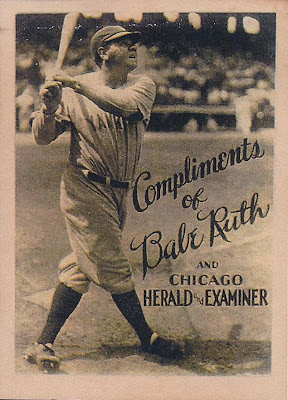 A reader recently inquired about what he believes may be an as-yet unreported third size of a Babe Ruth premium issued circa 1930 by the Chicago Herald and Examiner daily newspaper.
The Standard Catalog of Baseball Cards recognizes two sizes of the premium, measuring approximately 8-1/2" x 11" or 5" x 7". The card in question measures 2-3/16" in width at top; 2-1/8" wide at bottom. Height is 2-15/16" at left; just less than that at right.
I've had a chance to examine the card. Maybe I've been away from the counterfeit detection game too long. I no longer have a microscope and black lights on my desk top. My eyes aren't what they used to be. And maybe the newsest generation of fakes and fakers has passed me by with my antiquated expertise and examination techniques. I'm just not able to publicly make a call of good or bad on this item.
I like the look of the stock on which it is printed. The paper is about the thickness of photographic print paper and has a convincing aged look, both front and back. What I initially thought was a "reproduced" crease at top-left is an actual paper crease, clearly visible on the blank back.
The quality of the printing gives me pause, however. It's been many years since I had the larger-format premium in hand, so I don't recall its specs. I believe it was probably offset printed in the rotogravure offset process used to produce the Sunday magazine section in many newspapers of that era. I don't specifically recall ever examining the 5" x 7" version, so I can't comment on its production values.
This down-sized version also appears to have been printed in rotogravure four-color process, though I am unsure why the black ink portions have such a glossy, embossed, "wet" look.
Perhaps moreso than the physcial characteristics of the cardin question, I'm having trouble wrapping my mind around its original intended purpose. The 8-1/2" x 11" size was common to premiums in that era. It was a nice display item that might induce a baseball fan to buy the Sunday H and E off the newsstand, rather than the Trib or one of the other contemporary papers.
Frankly, I don't know why a 5x7 version would have been issued and am even more perplexed by this nominally 2-1/8" x 3" version. What could have been the intended use for which it was printed?
I'd guess that an examination of back issues of the Herald and Examiner for the few days before the Babe Ruth premium was actually issued might answer some of those questions, but we don't even know what year the premium was issued. Giving a bit more thought to that topic, perhaps the arbitrary designation of 1930 is too early. Perhaps it was issued in conjunction with the 1932 World Series, when the Yankees swept the Cubs. Or maybe there is a connection to the first All-Star Game at Comiskey Park in 1933.
This is not an idle inquiry; there are serious dollars at stake. The larger versions of the premium picture carry a book value of $1,300 in NM in the latest SCBC. Because this smaller version is more "card-like" in nature, and thus more appealing to many collectors, it is not out of the question that its value could be even higer than its big brothers, but at least one of the major certification services has declined to rule on its authenticity.
Naturally, anything you, the readers, can come up with in terms of facts, conjecture or opinions about this card would be most welcome.
Posted by Bob Lemke at 8:36 AM