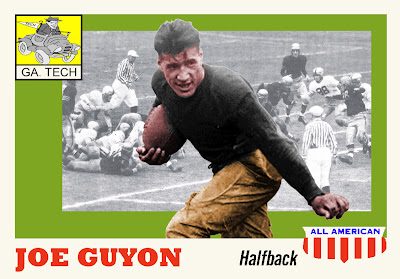 The latest addition to my series of 1955 Topps-style All-American college football cards is Joe Guyon, who starred at both Carlisle and Georgia Tech in the 1910s. For many years I'd had an interest in Guyon because, besides being a collegeiate gridiron star and an NFL Hall of Famer, Guyon also had a very successful minor league baseball career.

Georgia Tech didn't have any players in the original 1955 Topps All-American set, which I thought was a shame, since I'm sure the creative types at Topps could have worked up a great logo based on the team's unofficial nickname of the "Ramblin' Wreck." I've done my best to come up with something appropriate.

There is so much more to Joe Guyon's story that I can fit into 90 words on the back of his card, so I'm going to take a couple of days to present it here.

Because he spent his early collegiate career and his entire professional career in the shadow of Jim Thorpe, the name and fame of Joe Guyon are little known to today’s fans and collectors.

Like Thorpe, Guyon was a two-sport star who parlayed awesome athletic abilities into a life away from the White Earth Indian reservation near Brainerd, Minn., where he was born O-Gee-Chidah (sometimes translated as “Big Brave”) into the Ojibwa (Chippewa) tribe on Nov. 26, 1892. His English name was Joseph Napoleon Guyon. Also like Jim Thorpe, Joe Guyon was never saddled with what would today be considered the offensive nickname of "Chief," that was ubiquitously applied to virtually every Indian athlete in his era. A sportswriter or two, with a nod toward Mark's Twain's villain in Tom Sawyer, tried to make "Indian Joe" stick on Guyon, but it never really caught on.


He began his collegiate career under coach Pop Warner at the Carlisle (Pa.) Industrial Indian School in 1912. At 5’ 10” amd 195 lbs., he was a crushing blocker as a tackle for his teammate of Jim Thorpe. The team went 12-1-1. When Thorpe left the school, Guyon took over for him at halfback for the 1913 season. Carlisle was 11-2-1 that season, and both Walter Camp (Collier’s magazine) and the International News Service named Guyon a second-team All-American. Guyon also ran track at Carlisle; the school had no baseball team at that time.

From 1914-1916, Guyon attended Keewatin Academy, a private boys’ school that split its term (and sports seasons) seasonally between Prarie du Chien, Wis., and Ponce Park, Fla. Guyon spent his time at Keewatin bolstering his grades to make himself a better candidate for the major universities.

While on his way to visit a North Carolina school that had offered him a scholarship, Guyon stopped in Atlanta where his older brother Charles, himself a football star at the Haskell Institute and Carlisle, was an assistant under football coach John Heisman at Georgia Tech.


Guyon decided to matriculate at Tech. He became part of Heisman’s “Dream Team Backfield,” and when he wasn’t carrying the ball himself, he was clearing the way for others. Ralph McGill, Atlanta sportswriter, said of Guyon, “They could follow that big fellow and run to glory because he cleared the way, and I mean he cleared it!”

Another writer said, “Survivors of the teams Tech played in those days still shudder to recall the multiple impacts when Guyon blocked or tackled them, and he could punt over 60 yards consistently, place-kick from midfield and pass with the best.”

Guyon ran for 344 yards in just a dozen carries. Later that season, against Carlisle, Guyon played only the first quarter as his old school was humiliated 98-0. Georgia Tech was named national champions in 1917 and Guyon was honored as halfback on two of the major All-American teams of the day.

With a 6-1 record, Georgia Tech won the Southern Intercollegiate Athletic Association championship in 1918 and Guyon was named a tackle on Frank Menke’s first syndicated All-American team.


Even after Guyon was nearly 20 years removed from the collegiate football scene, McGill wrote in 1935, “There is no doubt in my mind that Joe Guyon is the greatest football player the South ever saw.”

Joe Guyon was elected to the College Football Hall of Fame in 1971. 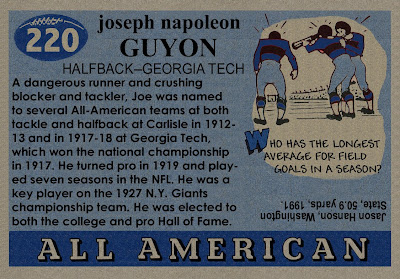 (We’ll pick up Joe Guyon’s story with his pro football and baseball careers next time.)
Posted by Bob Lemke at 7:49 AM