Pat Tillman made Hall of Fame, my custom card set 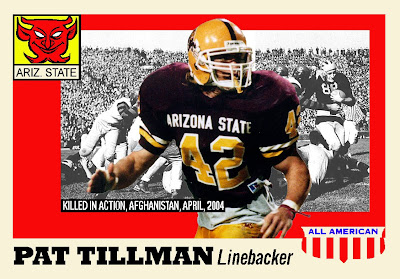 It was recently announced that Pat Tillman had been elected to the College Football Hall of Fame.


He made my own college football hall of fame when I learned the details of his life and death in 2004. A true American hero, you probably already know Tillman's story; if not, give it a Google.


For many years Arizona State has been my favorite football team in the Pac-10. I've even got a large decal of Sparky on the back of my custom-flamed gold PT Cruiser.


The Sun Devils had been unable to the crack Topps' lineup in the original 1955 All-American football card issue. Honestly, I'm not sure when an ASU player would have made it into my custom card homage to that set if Tillman had not made the ultimate sacrifice for his country. The Army's bumbling attempt to cover up the true story of Tillman's death did nothing to diminish my admiration for him.


When I decided in May, 2004, to create a 1955-style Tillman card, with a posthumous note on the front, I went right to the source to get a good color photo of him in college uniform. An e-mail to the sports information office at ASU drew a quick response in the form of the scan which I adapted for nmy card.


The team logo that appears is a direct steal from an original Topps card, which used a blue devil character for a Duke player. Since childhood, that stylized demon had been one of my favorite logos from the original All-American set.


Like most Americans, I knew nothing of Pat Tillman until his death. But I'm proud to be among those who have been able to pay tribute to a man whose life epitomized the title of All-American. 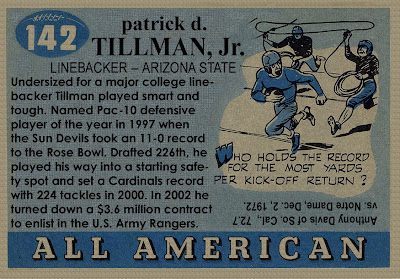