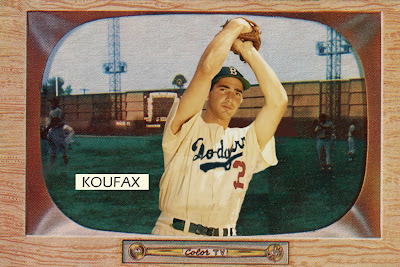 As I mentioned in my last posting, I found the circa 1957 photo of Sandy Koufax in action on the Ebbets Field mount so compelling that I couldn't stop with making just one custom card from it.
A hometown Brooklyn boy, Koufax had his "real" rookie card with the Brooklyn-based Topps gum company in 1955. He did not appear in that year's Bowman baseball set.


I've remedied that by creating a hybrid of a Topps photo and a Bowman format. Actually, I did it twice. The 1955 Bowman "Color TV" set has been one of my favorite baseball card issues of all time since the day my brother came home from the neighborhood grocery store with fifty cents worth of nickel packs and began sorting them on the living room rug, proudly announcing that he had "more than half a hundred" of the newly releasedcards. For some reason "half a hundred" seemd to me at the time like so much greater a quantity than "50." 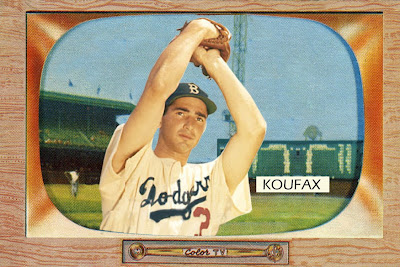 My first 1955 Bowman-style custom card was a George Crowe piece I featured in this space some months back. That card uses the mahogany tv cabinet. When the thought of doing a '55B Koufax popped into my head, I knew immediately I wanted to use the white oak cabinet that appeared on many of the early series in 1955 Bowman.


Unfortunately, my meager holdings of 1955 Bowmans do not contain any of the lighter wood framed cards, so I had to go on the internet and buy one. Before doing so, I paged through a library of images of 1955 Bowman to find an oak cabinet card that had the right photo background on which to place the Koufax photo.

I knew I wanted to find a card that showed a lot of the Shibe Park background in which the vast majority of the players had been photographed for that set. I found the perfect "host" card in #15, Boston Red Sox pitcher Frank Sullivan. Not only does the Sullivan card have the oak cabinet and a lot of stadium background, but the player's picture at center takes up very little space and could be easily airbrushed away.


I found myself in a quandry, however, as I studied the card of Cardinals' pitcher Brooks Lawrence. I've always liked the Lawrence card because the photo was taken on a nice sunny day, and the bright blue sky is nearly unmatched through the rest of the set. While the Lawrence card has the darker wood tv cabinet, it was no great chore to remove the photo portion of the card and put it into the oak furniture of the Sullivan card.
You'll notice I used a more close-up version of the Koufax photo on the Lawrence-derived card, which I think helps provide some distinction between my two "new" Koufax rookies. Both cards share the same back.


As with all of my custom cards shared on this blog, you are perfectly welcome to 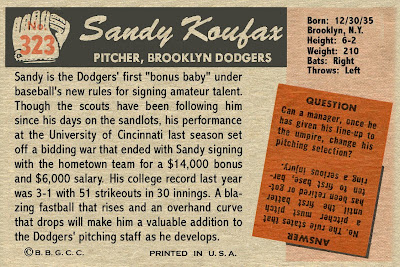 pick off the images (I usually present them in fairly high resolution) and paste together your own card.