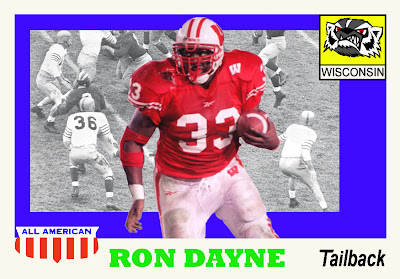 I saw in the newspaper the other day that former Heisman Trophy winner Ron Dayne lost much of his prized football bling in a couple of burglaries. The swag, reported to have been taking in two seperate burglaries at two different apartments, was valued at more than $140,000 and included his 1999 and 2000 Rose Bowl MVP rings and the bracelet representing his Maxwell Award (nation's top college football player) from 1999.


Dayne is the player most closely associated with the resurgance of Wisconsin Badger football in the late 1990s. He was the reason my own interest in Big 10 football was reawakened in that era (then, as now, I was an SEC fan first and foremost).


So, he was a natural for one of my 1955-style All-American football cards. Wisconsin had not been represented in the original Topps AA issue of 195. The only real "names" among its alumns were Elroy Hirsch and Alan Ameche, and in 1955 they were under football card contract to Bowman.


While it has only been four or five years since I created my Ron Dayne custom card, I can't say for sure where I stole the picture that appears on front. It probably appeared on a football card from one of the "real" card companies.


The Great Dayne never fully carried over his college football success to the NFL, but had eight seasons of Sunday football. Here's hoping he gets back his jewelry commemorating that great college career. 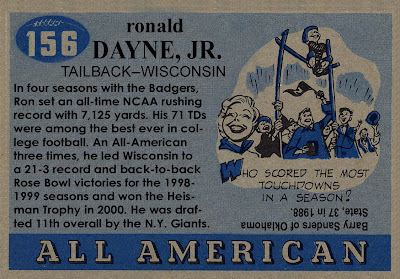