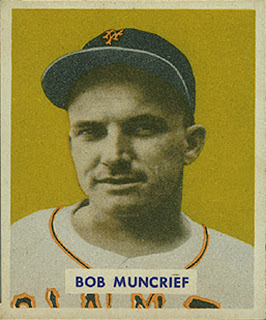 An e-mailed query from an old hobby colleague prompts this presentation.

Walt Edwards was my go-to guy at the FBI in the 1980s-90s when, as publisher of SCD, I was tilting at the windmill of card/memorabilia hobby crime. This was long before the days of Operation Bullpen. It greatly helped that Walt was a dedicated card collector with a broad understanding of the hobby.
Walt has since retired and is spending more time with his cards. Something he recently noticed prompted him to contact me after his own research failed to come up with an answer.
Walt noted that in the 1949 Bowman set, card #221, Bob Muncrief, pictures the pitcher in the uniform of the New York Giants. The back of the card, however, correctly identifies Muncrief as a Pittsburgh Pirate and accurately sums up his baseball career to that point.

About the time Muncrief's card was issued in the high-number series (besides the 1941 Goudey, the '49B is his only mainstream card), Muncrief was acquired on waivers by the Cubs. After spending the 1950 season with Los Angeles in the Pacific Coast League, he returned to the majors for a cup of coffee with the Yankees in 1951, then continued to pitch in the high minors through 1955, at the age of 39. 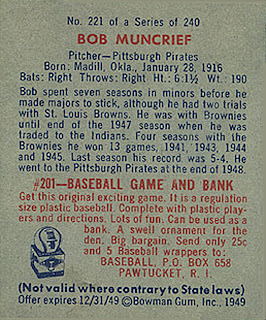 In my own search of the SABR data base, which includes all major and minor league affiliations and transactions, I came to the same conclusion as Walt, there is no known association between Bob Muncrief and the N.Y. Giants prior to his playing for their Double-A farm club in Dallas in 1955.
So why is Muncrief pictured as a Giant on his 1949 Bowman card?  My best guess is that the Bowman artist simply airbrushed the wrong uniform on a photo of Muncrief. It's also possible that the photo on the card is not Bob Muncrief. There aren't a lot of readily available photos with which to compare the picture on the card.  But in checking the image on his 1948 Indians and 1953 S.F. Seals team-issued photos, I saw nothing to indicate the player pictured is not the player named.
If you can shed any light on this mystery, please do so in the comment section.
Posted by Bob Lemke at 9:44 AM