Uncommon commons. In 2006 I purchased a complete set of The Sporting News and The Sporting Life newspaper microfilms from 1886 through the early 1970s. I figured they would be a great source of entertainment when I eventually retired. In my years at Krause Publications I had used the films to research feature articles and columns that appeared in SCD and Baseball Cards magazine. In that process I discovered that each issue of those venerable sports weeklies had many tidbits that as a collector of baseball and football cards I found interesting because they helped bring to life the faces on the cards I collected. I figured that if I found those items of interest, so would other vintage card collectors, so from time to time I compiled my notes into columns that I called "Uncommon Commons." I've decided to continue that tradition in this forum because a blog is tailor-made to host these short pieces and because it is easy to share images of some great old cards that may not be worth a lot of money, but that have an appeal to veteran collectors.

. . . In the days before A-Rod and Cameron Diaz, or even before Bo Belinsky and Mamie Van Doren, ballplayers and actresses were hooking up.
In December, 1952, N.Y. Giants pitcher Roger Bowman secretly married budding actress Donna Drew , withholding the news not only from the sporting press, but also from their familiesfor a number of weeks. 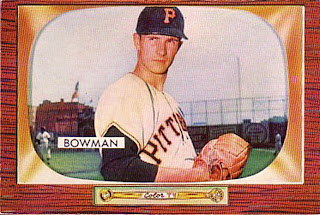 The couple had met in Oakland during the season where Bowman was out on option to the Oaks of the Pacific Coast League, and his bride-to-be was serving as team "mascot."
Bowman had a 2-11 major league career with the Giants (1949, 1950-52) and Pirates (1953, 1955). In the off-season he operated an upholstery shop in Hollywood. His only mainstream baseball card was in the 1955 Bowman set.


Donna Drew had a similarly modest Hollywood career, appearing in episodes of nine TV series between 1954-61, including Death Valley Days, I Led 3 Lives, The Adventures of Wild Bill Hickok, The Whistler, etc. 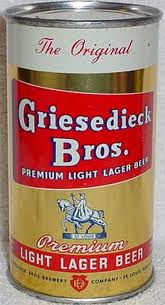 . . . When Anheuser-Busch bought the St. Louis Cardinals in 1953, the sales of beer in four of their minor league ballparks became prohibited by state laws that barred retail beer sales at any property owned by a brewery.
This prohibition affected the Cards' stadium operations at Houston, Rochester, Columbus (Ohio) and Omaha. They couldn't even offer fans a competitor's brew. In Columbus, due to a loophole in the city's open-container laws, fans were free to bring to their own beer to the ballpark . . . as long as it was 3.2 beer.

Anheuser-Busch held the radio broadcast rights for the Columbus Red Birds in 1953. On Sundays, they didn't air beer commericals, but donated the air time to local civic and public interest groups.
There was no such problem in St. Louis, though, because the Cardinals rented their stadium time at Sportsman's Park from the Browns.When the season opened, the ballpark's concessionaire raised the price of the three "popular" priced beers -- Fallstaff, Stag and Griesedeick -- by a nickel, to 30 cents, to match the price of the "premium" brand, Budweiser.

It was also announced when the brewery bought the team that they wouldn't initially be able to advertise Budweiser and the rest of A-B line on Cardinals TV games. Those telecasts had sponsored by a another local brewery selling Griesedieck (really) beer. The competing brewery had the right of first refusal for the 1953 season but graciously declined, though they did retain the radio broadcast sponsorship for both home and away games.
. . . According to Oscar Ruhl, in his TSN column "from the RUHL BOOK," when a New York Yankees player gave an autographed baseball to a fan, he had to reimburse the team $1.75. That was a discount from the $28.80/dozen price ($2.33) that Spalding charged for OAL and ONL balls in 1953. At that time, a single "official" major league ball carried an over-the-counter retail price of $3.20.
A team-signed 1953 Yankees ball sold in the November, 2010, Heritage auction  for $1,434. 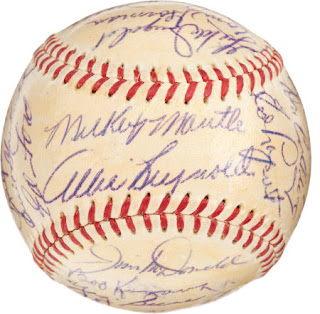