Uncommon Commons: In 2006 I purchased a complete set of The Sporting News and The Sporting Life newspaper microfilms from 1886 through the early 1970s. I figured they would be a great source of entertainment when I eventually retired.
Over the years I had used the films to research feature articles and columns that appeared in SCD and Baseball Cards magazine. In that process I discovered that each issue of those venerable sports weeklies had many tidbits that as a collector of baseball and football cards I found interesting because they helped bring to life the faces on the cards I collected. I figured that if I found those items of interest, so would other vintage card collectors, so from time to time I compiled my notes into columns that I called "Uncommon Commons."


I've decided to continue that tradition in this forum because a blog is tailor-made to host these short pieces and because it is easy to share images of some great old cards that may not be worth a lot of money, but that have an appeal to veteran collectors.
Prior to the 1960s, careers in pro football weren't nearly as lucrative as they became in later decades. For one thing, there were only 12 teams in the NFL, so roster spots were limited. 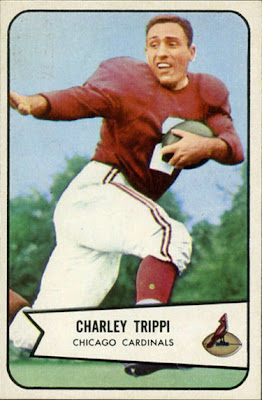 It was not uncommon for star college football players to take a run at professional baseball. One such prospective cross-over was Charley Trippi. Between 1942-46, with time out for WWII, Trippi was a two-time All-American at Georgia.
In 1947 he signed to play baseball for the Atlanta Crackers of the Southern Association, being both a legitimate prospect -- he had been an All-American in 1946 and hit over .400 for the Bulldogs -- and a fan-favorite gate attraction.
Trippi played at first base and in the outfield. In 106 games he led the team with a .334 batting average, though without much power, hitting only three home runs.
Trippi was provisionally sold to the Chicago White Sox for 1948, but when the team demanded he quit playing pro football, he opted for the gridiron career. Trippi had begun his NFL career with the Chicago Cardinals in 1947.

Charley Trippi never appeared on a baseball card, but he was in both the Leaf and Bowman football card sets in 1948, and in every Bowman set from 1950-55.
Posted by Bob Lemke at 2:10 PM