When I left Krause/F+W in 2006 I made arrangements to purchase the archives of The Sporting News and The Sporting Life newspaper microfilms from 1886 through the early 1970s that I had put together over the years. I figured they would be a great source of entertainment when I eventually retired.
Over the years I had used the films to research feature articles and columns that appeared in SCD and Baseball Cards magazine. In that process I discovered that each issue of those venerable sports weeklies had many tidbits that as a collector of baseball and football cards I found interesting because they helped bring to life the faces on the cards I collected. I figured that if I found those items of interest, so would other vintage card collectors, so from time to time I compiled my notes into columns that I called "Uncommon Commons."
I've decided to continue that tradition in this forum because a blog is tailor-made to host these short pieces and because it is easy to share images of some great old cards that may not be worth a lot of money, but that have an appeal to veteran collectors.
I'm going to kick off the revival with the story of a journeyman pitcher who had an outstanding outing one day in 1928.
Hank Johnson had a long, but only modestly successful major league career with the Yankees (1925-36, 1928-32), Red Sox (1933-35), A's (1936) and Reds (1939). Lifetime he had a 63-56 Major league record on a 4.75 ERA. 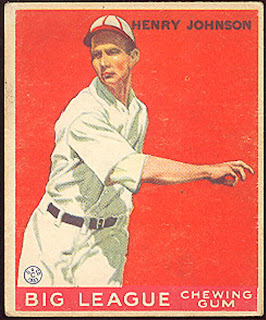 Johnson pitched a 4-0 shutout. In the process he faced Ty Cobb (who was 1-3 in the game), Mickey Cochrane (0-4), Al Simmons (2-4), Jimmie Foxx (1-4), Eddie Collins (0-1), Tris Speaker (0-1) and Lefty Grove (0-2).  None of the hits Johnson gave up that day went for extra bases.
Joining Johnson on in the Yankees line-up that day were another four Hall of Famers: Babe Ruth, Lou Gehrig, Earle Combs and Tony Lazzeri.
I wonder if there has ever been another regular-season game that included so many Hall of Famers on one team, or some many on both sides of the contest?

After he left the big leagues, Johnson continued to pitch in the minors until he was 37 years old in 1943.


Usually referred to as Henry Johnson n his baseball cards, Johnson is most often seen on his 1933 Goudey (and Canadian-version World Wide Gum) and 1936 Goudey Wide Pen, though he does appear in a couple of more obscure issues.
Posted by Bob Lemke at 1:42 PM