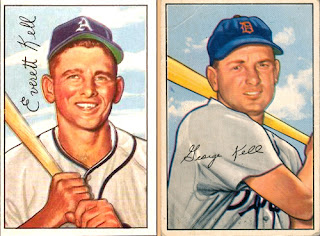 In 2006 I purchased a complete set of The Sporting News and The Sporting Life newspaper microfilms from 1886 through the early 1970s. I figured they would be a great source of entertainment when I eventually retired.

Over the years I had used the films to research feature articles and columns that appeared in SCD and Baseball Cards magazine. In that process I discovered that each issue of those venerable sports weeklies had many tidbits that as a collector of baseball and football cards I found interesting because they helped bring to life the faces on the cards I collected. I figured that if I found those items of interest, so would other vintage card collectors, so from time to time I compiled my notes into columns that I called "Uncommon Commons."
I've decided to continue that tradition in this forum because a blog is tailor-made to host these short pieces and because it is easy to share images of some great old cards that may not be worth a lot of money, but that have an appeal to veteran collectors.
During the 1952 season, there were three of what The Sporting News called "brother acts" in the major leagues. Actually, they were all in the American League.
What the paper found particularly interesting was that all of the ballplaying brothers shared similar surnames: Kell, Keller and Kellner.

Future Hall of Fame third baseman George Kell played for the Red Sox and Tigers that season, while his brother Everett "Skeeter" was a second baseman for the Philadelphia A's.

Charlie "King Kong" Keller was wrapping up his major league career back with the Yankees as a reserve outfielder in 1952. His brother Hal was a catcher with the Senators.
The third pair of big league brothers in 1952 was Alex and Walt Kellner. They were moundmates for the A's.
Two of the '52 brothers, Hal Keller and Walt Kellner, did not appear on any baseball cards -- at least not mainstream Bowman or Topps cards -- during their careers, and Skeeter Kell was only on a 1952 Bowman. George Kell, Charlie Keller and Alex Kellner appeared on many cards during their playing days.
Posted by Bob Lemke at 9:41 AM