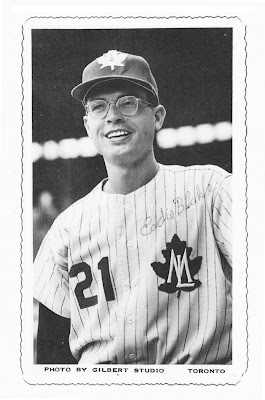 A couple of days ago we presented a newly reported vintage minor league team issue for the 1947 Hollywood Stars. This time out we have another "new" set issued 50+ years ago.

This report also comes courtesy of Bob Thing, a veteran collector from Maine.

Bob has sent photocopies of six of what appear to be a player photo set, possibly issued by team as a souvenir item, of the 1955 Toronto Maple Leafs of the International League.

The black-and-white cards are printed on thick paper with scalloped or deckle edges and measure about 3-1/2" x 5-1/2". Pictures are portraits or posed action shots. Printed in the white border at bottom is "PHOTO BY GILBERT STUDIO TORONTO". Some of the pictures have facsimile signatures on front. Two of the photocopies sent have player signatures hand-applied in blue; whether they are autographs or just identification of the players by a former owner is not known. Backs are blank.

Of the 29 players on the Leafs roster in 1955, 24 had or would have major league experience, and many will be found on Topps and Bowman cards of the Fifties.
Posted by Bob Lemke at 10:04 AM