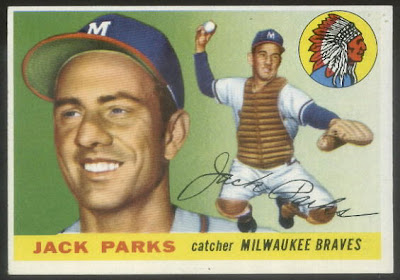 Uncommon commons. Based on contemporary accounts from The Sporting News; tidbits that as a collector of baseball and football cards I found interesting because they help bring to life the faces on the cards I collected. I figure that if I found these items of interest, so would other vintage card collectors.

Despite the fact that he had two 1955 Topps cards, in the regular set and the Doubleheaders, picturing him with the Milwaukee Braves, catcher Jack Parks never appeared in a major league game.


Topps' writers jumped the gun in writing the back of his 1955 card, by saying "Jack's getting his first Big League opportunity in '55 . . . " The bubblegum company also erred in labeling his stats at bottom as "MAJOR LEAGUE BATTING RECORD". In fact, the stats reflected Parks' 1954 season with the Braves' two top farm clubs, at Atlanta and Toledo.

With Del Crandall a fixture behind the plate following his return to the Braves in 1953, the back-up backstop position was a revolving door for journeyman catchers throughout the 1950s and early 1960s. While many of those second-stringers found their way onto baseball cards in the era, most never enjoyed significant success in the major leagues. Unlike Parks, though, at least guys like Paul Burris, Charlie White, Bob Roselli and Carl Sawatski had major league playing time to go with their Topps cards.

The Braves gave Parks several opportunities in spring training to make the team, but he always ended up returning to the minors when the season opened. Performances such as that displayed against the Brooklyn Dodgers in a spring game in 1953 didn't bolster Parks' reputation for defense.

In a loss to the Brooklyn Dodgers. Parks allowed seven stolen bases, five of which came in the sicth inning, when Brooklyn scored six runs on four hits, two walks and a hit batsman. In that game Parks was stolen on by Don Hoak (twice), Jackie Robinson, Gil Hodges, Chuck Thompson, Pee Wee Reese and Carmer Mauro.

Parks began playing professionally at the age of 16 in 1944 with a Giants Class D team. He played 18 seasons in the minor leagues, along with several seasons of Latin winter ball, without ever getting a major league appearance.  He was Boston/Milwaukee Braves property from 1952 into 1955. During his playing days he was at one time or another a minor league player in the organizations of the Giants, Pirates, A's (Philadelphia and Kansas City), Red Sox, Phillies, Senators, Orioles and Tigers. He retired after the 1961 season, at the age of 33. He hit a lifetime .256 and exhibited just enough power (hitting as many as 25 home runs in a season) to keep his dream alive for nearly 20 years.


Because he was pictured with the Braves on his 1955 cards, Parks had special status with me as a young collector, even if I wasn't aware that he never made the majors. 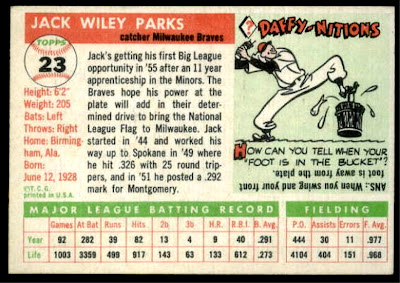