Hobbyists disagree on the pronunciation of the name of Black Sox pitcher Ed Cicotte. A 1953 feature in The Sporting News provided the answer right from the mouth of a relative with the same surname. 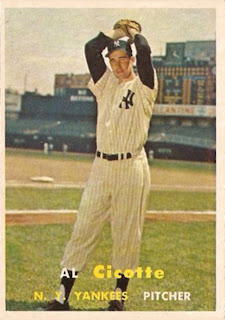 In 1953 Yankees' pitching prospect Al Cicotte was in spring training camp with the big club after an 8-9 season in the high minors. Cicotte had signed as a Yankees farmhand at the age of 18 in 1948, and spent four seasons bouncing between the low minors and military service. It would be four more years before he made his major league debut with New York, beginning an up-and-down career that included service with the Senators, Tigers, Indians, Cardinals and .45s between 1957-62, with stints at their top minor league teams interspersed until he hung up the spikes after the 1962 season. His major league record over five seasons was 10-13 with an ERA of 4.36.
In one of his "down" years, 1960, when Cleveland had farmed him to their club at Toronto, Cicotte was the International League Pitcher of the Year, winning the pitcher's Triple Crown with a 16-7 record, 1.79 ERA and 158 strikeouts. He also pitched a no-hitter against the Montreal Royals on Sept. 3.
In that TSN interview of 1953, Al Cicotte was asked about his relationship with Ed Cicotte, his great-uncle who had won more than 209 major league games before his lifetime banishment for his role in the 1919 World Series scandal. 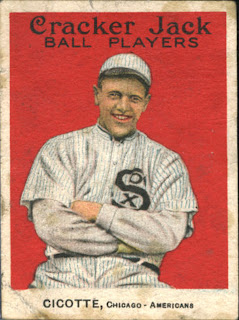 "I never wanted to talk to him about it," the younger Cicotte said of the affair, "I never knew how much he wanted to talk about it. I didn't want to push it."
Cicotte told the reporter how his great-uncle had asked him to visit before he left for his first year of professional ball. Besides some pitching tips, the disgraced player gave his brother's grandson this advice, "Watch yourself, but watch your companions more. Stay away from gamblers. Stay away from wrong people."
During the interview, Al Cicotte cleared up the pronunciation conundrum. He pronounced his patronym the way his father did, See Kott. That branch of the family may have adopted the pronunciation in an attempt to distance itself from the infamous pitcher, who pronounced the family name Cy Kotty.
Posted by Bob Lemke at 8:17 AM