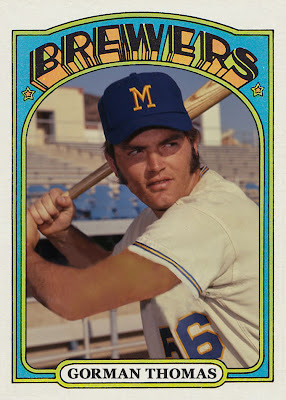 There's no doubt Gorman was my all-time favorite Brewer. He was also my daughter's first baseball hero. On her 5th birthday in 1984 we went to Milwaukee County Stadium for a game during Thomas' first visit back to Milwaukee after he had been traded to the Indians. We even snagged a batting practice foul ball from our seats down past the visitors dugout near field level.

Gorman was a big favorite in Milwaukee because of his blue-collar image and his big home runs. (We tended to quickly forget the many strikeouts.)

Thomas made his big-league debut in 1973, and appeared on his first Topps card in 1974. Making a '73-style custom would have probably been more appropriate, but I really hate that format, and when I found an early Thomas photo it just cried out for treatment in the funky 1972 format.

I bought a cheap '72 Brewer card on eBay and scanned the front. I spent several hours cleaning up the registration before I decided that made my card look too clean. So in the end I opted for just switching out the photos and changing the name.

You'd have to be a die-hard '72 collector and have one at hand to know that I wasn't able to exactly duplicate the font Topps had used for the name.


Together with the 1971 and 1977 Cecil Cooper cards and the 1974 Robin Yount, this custom concludes my run of '70s Brewers creations . . . at least until I find a good early Paul Molitor photo, or maybe a Jim Gantner. 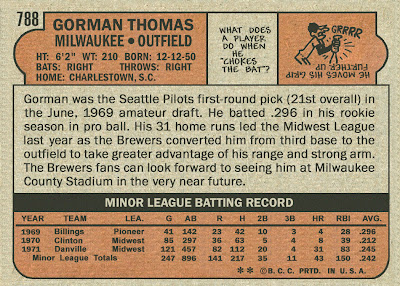