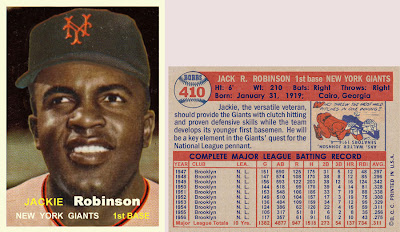 My most recent custom card project is a bit of an historical stretch . . . but it could have happened.


On Dec. 13, 1956, it was announced that Jackie Robinson had been traded by the Brooklyn Dodgers to the N.Y. Giants for left-handed pitcher Dick Littlefield and $35,000.

The Dodgers, who always seemed to be just short of the pitching needed to clinch pennants and win World Series, had seriously offered Robinson as trade bait as far back as 1952. They were looking to unload a player who could no longer hold down a position on an every-game basis, whose hitting was on the decline and who was pulling down a $40,000 salary.

The Giants needed a first baseman for the 1957 season. They had just lost slugger Bill White to military service and guys like Orlando Cepeda and Willie McCovey were still a year or two away.

Robinson had made it clear that if he was ever traded to a team outside of New York, he would retire. At that, after learning that he had been dealt to the Giants, Robinson told owner Horace Stoneham that he wanted until Jan. 21 to consider whether he would continue in the game.

That proved to be a disingenuous stall. Robinson had already, in fact, decided he would retire and had sold an exclusive story to that effect to Look magazine for a reported $50,000. The magazine was not due to go on sale at newsstands until about Jan. 21, but subscriber copies began to arrive in the mail by the second week in January and the cat was out of the bag. Robinson was leaving baseball to take a position as personnel director for Chock full o' Nuts coffee, which had more than two dozen coffee shops in New York City, mostly in black neighborhoods, along with its retail grocery store coffee business.

Given that Robinson didn't make his retirement official until late January, 1957, I'm surprised Topps didn't have a card of him in that year's set. By mid-January, the first several series of Topps cards must have been in production, if not already on the printing press. Of course if he had been set to appear in the early series, it would have been as a Brooklyn Dodger. Perhaps somebody at Topps had been tipped off about the retirement.

If Topps did have an insider, things could have gone the way I have projected with my custom card of Robinson as a Giant.

Never hesitant to airbrush an existing photo to reflect a team change, Topps could have rushed a Robinson-as-Giant card into production in the month between the trade and the time his retirement was announced. 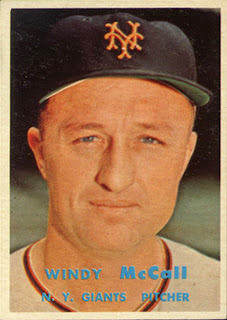 Regardless, I've attempted to remedy the baseball card historical record with my custom creation.

There does not appear to be any extant contemporary photograph of Jackie Robinson in a Giants uniform, so I had to make my own.

You might recognize the basic portrait as the image that was used on Robinson's 1952, 1955 and 1956 Topps cards. The fact that the portrait was cut off just above the jersey neckline really tied my hands, as it forced me to use an extreme close-up picture on my card. That wasn't all that unusual among 1957 Topps, however, so I don't think my card looks out of place.

To replace the Dodgers jersey, I used the '57 card of Windy McCall, which provided the background, as well. I tried to find another 1957 or even 1958 Giants card that would allow me to graft Robinson's head on and give me a less close-up perspective, but nothing seemed to work, or at least I couldn't make it work with my rather rudimentary Photoshop skills. 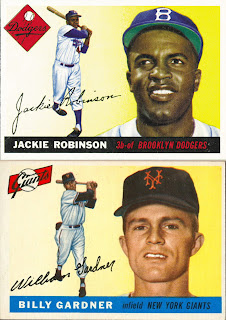 Likewise, I experimented with about a dozen other '57 backgrounds with brighter colors or stadium scenes, but they never looked right with the close-up portrait. The more I look at what I have, the better I like it as a match for the "real" 1957s.

I tried on half a dozen or more Giants caps from other cards before I settled on the cap from the 1955 Billy Gardner card. I've never had much luck previously with piecing together different elements -- cap, jersey, portrait -- but I think this one works well. It may not be as good as an original unretouched photo of Robinson in a Giants uniform would have been, but I think it compares well with what Topps artists may have come up with.
Posted by Bob Lemke at 10:35 AM